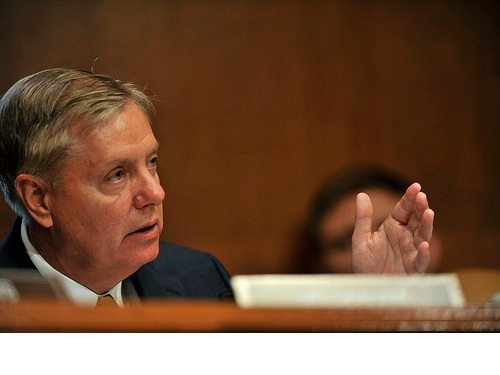 Our impression of American behavior during disasters has been that people generally pull together, that adversity brings out the best in us. Sure, we know that people do very bad things, but the press often notes how people also go out of their way to help and protect their neighbors. In fact, that feeling of mutuality was what we thought undergirded the nonprofit sector in a democratic society.

It must be that we fell for some Panglossian view of America, if we are to believe Sen. Lindsey Graham (R-S.C.). At a Senate Judiciary Committee hearing yesterday, Graham grilled Attorney General Eric Holder about the proposed ban on assault weapons. We haven’t seen the news reports that verify what Graham says happened—or sort of happened—to spark his support for carrying around military-style assault weapons:

“Can you imagine a circumstance where an AR-15 would be a better defense tool than, say, a double-barrel shotgun? Let me give you an example, that you have (sic) an lawless environment, where you have an natural disaster or some catastrophic event — and those things unfortunately do happen, and law and order breaks down because the police can’t travel, there’s no communication. And there are armed gangs roaming around neighborhoods. Can you imagine a situation where your home happens to be in the crosshairs of this group that a better self-defense weapon may be a semiautomatic AR-15 vs. a double-barrel shotgun?

I’m afraid that world does exist. It existed in New Orleans, to some extent up in Long Island [after Hurricane Sandy], it could exist tomorrow if there’s a cyber attack against [the] country and the power grid goes down and the dams are released and chemical plants are — discharges.

What I’m saying is if my family was in the crosshairs of gangs that were roaming around neighborhoods in New Orleans or any other location, the deterrent effect of an AR-15 to protect my family, I think, is greater than a double-barrel shotgun.”

As far as we can tell, Graham must be referencing a gang of white vigilantes in New Orleans’ Algiers Point neighborhood who, armed with shotguns and assault weapons, allegedly opened fire on African Americans “with impunity” after Hurricane Katrina; the militia was reportedly on the lookout for anyone who “didn’t belong” in the neighborhood, as reported by ProPublica and The Nation. If so, maybe Graham’s fears would have more of a basis in reality if he looked a little more like Holder and was facing a white militia armed with AR-15s. —Rick Cohen