Looking for Antiwar Messages at the Armed Services Committee Hearing 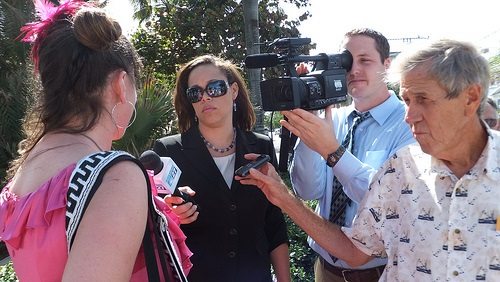 The hearing of the Senate Armed Services Committee yesterday morning began with repeated disruptions from antiwar protesters. Our guess is that some of the protesters were from Code Pink, an organization that has been diligent in speaking up against overseas U.S. military actions, whether conducted by the Bush administration or the Obama administration.

Nonetheless, in response to President Obama’s authorization of expanded military actions against the Islamic State army that has conquered for the moment huge chunks of Syria and Iraq, the antiwar response has been noticeably more muted than it was in reaction to President Bush’s authorization of an invasion of Iraq in 2003. ISIL’s atrocities like repeated beheadings and mass killings have garnered attention like nothing since Al Qaeda, but both the right and the left have been mixed in their reactions to the president’s plan.

The President has committed no U.S. troops engaging in combat (the euphemistic “boots on the ground”) but that scenario is difficult to avoid, whether in the near term, should U.S. advisors end up physically proximate to the fighting, or in the long run if, as with the original use of advisors in Vietnam, ever-increasing deployments add up to an inevitable military combat presence. The president pledged to conduct air attacks against ISIL, leaving the groundwork to the Kurdish Peshmerga, elements of the questionable Iraqi army, and whatever might be identifiable as the remnants of the Free Syrian Army. Attacking from the air is seen as an alternative to putting the Army and the Marines into direct combat against ISIL’s forces.

Notwithstanding the technical precision of modern air warfare, it still ends up killing civilians, especially when an opponent like ISIL might be embedded in civilian areas. Within relative moments of taking office, Prime Minister Haider al-Abadi’s air force bombed a hospital in Fallujah, killing 42 people and wounding another 29. Killing from the air, where people on the ground are just about invisible, is not pristine.

History would suggest that it’s time for the antiwar movement to raise important issues about the U.S. plan to deal with ISIL. Maybe this war against ISIL is different; maybe this is an instance where U.S. military action is necessary to stop ISIL, which has now gathered a large military force and deployed it like a professional army. Maybe ISIL can’t be dealt with the way that the U.S. is addressing Al Qaeda affiliates in Yemen and Somalia. But it is nevertheless the role of the anti-war movement to engage in and elevate the quality of the debate when American civilian and military leaders contemplate military action overseas.

An editorial writer for the Dallas Morning News rhetorically asked the protesters speaking out at the Senate hearing if they had an alternative to military action to propose in stopping the threat of ISIL. However, the writer, Tod Robberson, acknowledged that past U.S. mismanagement of things in the region had been helpful to ISIL in recruiting adherents and questions whether the Obama administration’s upcoming actions with potentially limited support from coalition partners will simply exacerbate the perception that the war against ISIL is an American war.

A consistently vocal antiwar group in recent times has been Win Without War. Its blog has included commentary that past efforts to arm Syrian rebels have led to equipment falling into the hands of ISIL, information on the various competing proposals in Congress to authorize military action, and a critique of U.S. policy in the Middle East as “perpetual war.” Win Without War has also linked to a cost-counter that is calculating what it is costing the U.S. ($312,500 every hour) for military action against ISIL.

Nonetheless, the antiwar voice seems muted. A dozen or so placard-holding protesters at a Senate Armed Forces Committee hearing feels desultory. In an interview with the Real News Network’s Paul Jay, Code Pink’s Medea Benjamin attributes the weakness of the antiwar movement to President Obama:

“It’s a one-word answer. Obama. And it wasn’t Obama getting in; it was the lead-up, it was the campaigning for Obama, when people were so desperate for an alternative to Bush that they said, I’m going to throw myself into this, I’m going to take off of work, students taking off of semesters, I’m going to put my life into getting this guy elected who said he was against the war in Iraq. And we put all our hopes and dreams into Obama, thinking that because he was against the war in Iraq and because he said Afghanistan was a good war—he didn’t really mean that; you know, he was just saying that to get elected. But he was a smart guy, and he understood that war was not the answer, and he was going to get us out.

“And so the steam was just taken out of the whole movement. And it was amazing to see, because you said ‘tens of thousands.’ I mean, there were eight times during the Bush administration that we got over 100,000 people. And we had a huge movement. You just look at one group, like Code Pink; we came out of nowhere, and suddenly we had over 300,000 people on our mailing list, and we had over 300 groups around the country and, really, around the world…When Obama started to gain steam as a candidate, those started fizzling out. And when he won the election, we had half the numbers of people we had before on our mailing list. And most of the groups started to disintegrate.

“So that was indicative of what was happening to the whole peace movement.”

A prolific antiwar writer named John V. Walsh recently suggested in Counterpunch that the anti-war movement might deserve an “R.I.P.” He wrote that antiwar activists like Benjamin were “notorious by now for putting Party over principle,” and the Occupy movement, hardly much of a force at this time, had just about nothing to say about war and foreign policy during its brief heyday. Where is the voice and influence of an antiwar movement at a time when vigorous debate and analysis is needed?—Rick Cohen