Looking for Signs of the U.S. Antiwar Movement 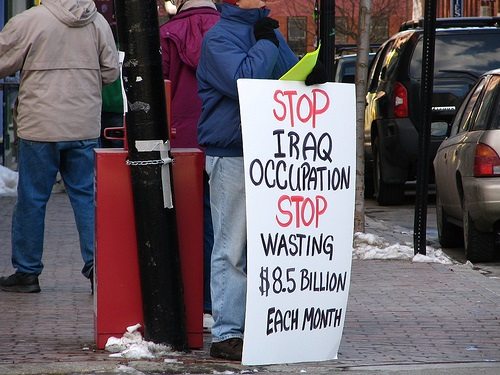 As this is being written, a Sunni-dominated army under the aegis of the Islamic State of Iraq and Syria (ISIS) is marching through much of northern Iraq, heading to the nation’s capital, Baghdad. Pressure is mounting on the hapless Obama administration, which seems to have been caught a little by surprise as Iraqi military personnel jettisoned uniforms and weapons to flee the ISIS advance, to do something. Some people are calling for air strikes, though intelligence that would make the airstrikes useful against the amoebic ISIS structure appears to be in short supply. Others are suggesting that the U.S. recruit tactical and military support from Shiite-dominated Iran to bolster the Iraqi regime, notwithstanding the historical oddity of having the U.S., which has long been talking about bombing Iran to stop its nuclear program, join up with the mullahs to resist the marauding Sunnis. Still others are concerned that the U.S. position—sort-of in support of the Sunnis in Syria against the Assad regime backed by the Shiite Hezbollah, nominally allied to Sunni nations along the Persian Gulf but supporting Nouri al-Maliki’s Shiite government in Iraq—is hopelessly muddled and likely to accomplish the creation of a new radical state in the region, undoing the Sykes-Picot borders from World War I, which could become the new Al Qaeda locus in the region for terrorist attacks on the West.

What has many Americans scared is that this chaotic scenario will lead the U.S. into some new form of military intervention in the region, despite having twice elected Barack Obama as president in part due to his commitment to withdraw the U.S. military from Iraq and Afghanistan. Even the Nobel Peace Prize–winning president has been responsible for a surge in Afghanistan, an air war in Libya to create yet another just-about-failed state, and, by refusing to arm moderate forces in Syria, the weakening of the opposition to Assad and the strengthening of jihadist elements among the rebels. It may have been the unthinking commentary of a rusty political candidate, but Hillary Clinton last week hinted that she would be open to keeping a residual U.S. military presence in Afghanistan, no doubt because, as she noted, the Afghanis are watching what is happening in Iraq. At the same time, she has cautioned against providing military support to the al-Maliki government in Iraq.

Will the U.S. nonprofit sector countenance a return to military engagement in the Middle East, even if the military engagement is from the air rather than boots on the ground? With an election coming in 2014, are antiwar activists going to take positions that might embarrass the lame-duck Obama or the likely Democratic standard-bearer, Clinton?

The unholy mess of Iraq leads to the question of what the structure, content, funding, and role of the nonprofit antiwar movement is today. Writing for Counterpunch, John V. Walsh has a scathing commentary on the status of the progressive antiwar movement. Dismissing most of the major political candidates on the scene as relatively hawkish, including Clinton, Senator Elizabeth Warren, and even Senator Bernie Sanders, Walsh reserves harsh commentary for the antiwar left, suggesting that activists such as Norman Soloman and Medea Benjamin, among others, “are notorious by now for putting [Democratic] Party over principle.”

Natasha Lennard’s analysis of the anti-war movement is equally scathing:

“Anti-war is a rhetorical position that can be pandered to with troubling effect. It enables the Obama administration to declare the end of ‘war’ by withdrawing and removing troops, while maintaining corporate and contracted assets in the military’s wake.”

She adds that the Obama administration’s proclivity to wage war without war, with actions such as drone strikes (16 in Pakistan on the day she wrote her commentary), makes the withdrawal of troops something less than a stoppage of warfare. Her point matches that of right-wing critics who, while admitting that the Bush administration bears the initial and major responsibility for having created the Iraq War mess, note that the antiwar movement, except for some libertarian interests, has been largely silent in the wake of the Obama administration’s active bombing and drone campaigns in several countries.

What does an antiwar movement actually accomplish? Law professor Marjorie Cohn writes that Daniel Ellsberg, perhaps the nation’s most famous critic of the American intervention in Vietnam, does not believe “that the antiwar movement shortened the war, but he says the movement put a lid on the war.” That means that perhaps the antiwar movement helped deter President Johnson from accepting some of the more extreme options that his military advisors were suggesting to reverse the course of the war. A revival of an antiwar movement now might help rein in the inclinations of Hillary Clinton or others to pursue strategies that will take the U.S. back into a self-defeating military engagement in the Middle East.

It just so happens that last month civil rights leader and historian Vincent Harding died at age 82. Harding was the author of Martin Luther King Jr.’s famous antiwar speech, delivered exactly one year to the day before King was assassinated in Memphis. The speech reminds us how nonprofits of all stripes have a stake in taking a position about war, not just those nonprofits self-identified as antiwar:

“This query has often loomed large and loud: ‘Why are you speaking about the war, Dr. King?’ ‘Why are you joining the voices of dissent?’ ‘Peace and civil rights don’t mix,’ they say. ‘Aren’t you hurting the cause of your people,’ they ask? And when I hear them, though I often understand the source of their concern, I am nevertheless greatly saddened…Indeed, their questions suggest that they do not know the world in which they live.”

King answered the challenge of his critics in this way: “This I believe to be the privilege and the burden of all of us who deem ourselves bound by allegiances and loyalties which are broader and deeper than nationalism and which go beyond our nation’s self-defined goals and positions. We are called to speak for the weak, for the voiceless, for the victims of our nation and for those it calls ‘enemy,’ for no document from human hands can make these humans any less our brothers.”

It remains to be seen whether a new antiwar movement can emerge and act in response to the ever-increasing chaos of sectarian violence and civil war in Iraq.—Rick Cohen