Lost in Place: Most of U.S. Suffering from the Opposite of Gentrification 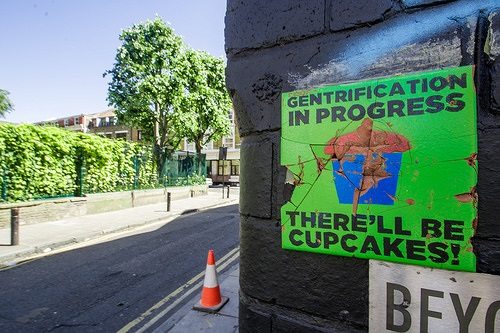 Gentrification is not “ruining” America’s cities—“or at least, not enough of [them],” reports the Guardian. The negative impacts of poverty far outweigh the annoyances of hipster arrogance and old neighborhoods overrun with boutique coffee shops.

The article quotes a new report published by City Observatory, Lost in Place, which says the opposite of gentrification is taking place; as urban neighborhoods get older and shabbier, the people who live there fall deeper into poverty. The number of neighborhoods with a high poverty rate has tripled over the last 40 years.

The report looked at 51 urban areas from 1970 to 2010 and found that more than 2,000 census tracts (each with about 4,000 residents) went from below-poverty to high-poverty. On the other hand, neighborhoods that gentrified, meaning their poverty rate dropped from above 30 percent to less than 15 percent, were clustered in particular areas where gentrification is a hot topic—New York, Chicago, and New Orleans.

But in general, poverty got deeper and reached into more neighborhoods, as the number of high-poverty tracts increased to 3,100 from 1,119 during those 40 years. At the same time, only about 105 high-poverty areas gentrified.

One thing contributing to this trend, according to the article, was the decline in urban racial segregation. “As African Americans gained more income and education and moved away from their communities, the economic diversity of those communities dropped into deeper poverty,” meaning those who could afford to move out did so, leaving poor residents behind. These neighborhoods were primarily black and Latino.

As per the report, another reason for the increase in poor neighborhoods is the aging building stock and deterioration of infrastructure in the areas more affordable for low-income families. “Because the slow decline is more common and less visible, it is seldom remarked upon, while gentrification, when it happens—which is both unusual and dramatic—is far more evident change.”

Experts say that gentrifying areas can uproot lower income people, and there are plenty of examples. But the National Housing Institute points out that “it’s not a matter of which is worse: gentrification or poverty. Americans should be concerned about both.”

If anything, this is a manifestation of a megatrend in American society, where those in poverty and the richest “one percent” are growing while the working- and middle-classes are hollowed out.

“Gentrification is not always bad—everyone wants better schools, safer streets, and access to jobs,” says the Housing Institute’s executive director, adding, “What you don’t want is the displacement of people for the profit of a small handful of apartment building owners and developers.”

The article points that the most common public policy to counteract the negative impacts of gentrification, affordable housing, tends to be located in low-income neighborhoods, further increasing the concentration of poverty, which is linked to higher crime, worse health, and low economic prospects.—Larry Kaplan