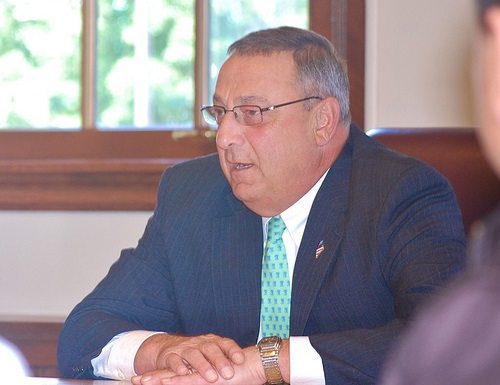 The original headline of this Bangor Daily News was incorrect, though perhaps that’s the way Maine’s Governor Paul LePage really meant it. His idea was the creation of “Open for Business” zones in which employees would not be required to join labor unions. (Of course, federal law prohibits forcing employees to join unions.) However, his proposal would allow employees not to pay union dues, essentially carving out areas of the state in which companies and employees would have what conservatives call “payroll protection” against mandatory dues contributions to unions.

LePage has long advocated that Maine become a “right-to-work” state so that it could better compete against Southern states that are. The corporate tax and bond incentives and other benefits of LePage’s proposed zones (including a 100 percent income tax credit for the first 10 years and a 50 percent credit for the next 10 years) would be for companies that invest at least $50 million and generate 1,500 jobs; at present, Maine has only 15 private businesses in the entire state that employ more than 1,500 workers. LePage must clearly be salivating at prospects of big employers like Toyota and Volkswagen choosing Maine for future plant locations as they have done in Southern states.

When conservatives call for paycheck protection, they are particularly concerned about part of union members’ dues being used for the unions’ political activism, which they are allowed to do as 501(c)(5) entities. Somehow, they think that all of these hardworking laborers are funneling huge slices of their paychecks into partisan political activity. This infographic shows the relative power of one member of the Koch family funding “dark money” nonprofits versus 515,000 labor union members: 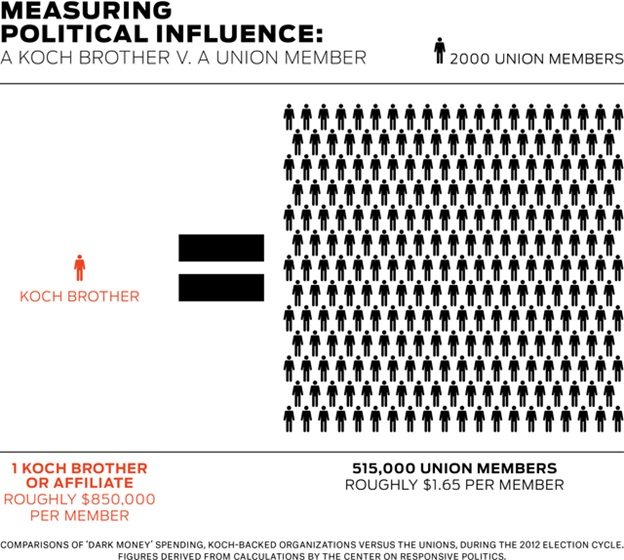 For all 14 million union members putting a portion of their dues into politically active groups, the sum of labor union political financing is larger than the Koch brothers’, but there are only two Koch brothers. You can add a number for the Koch brothers’ employees who contribute to their bosses’ favorite (c)(4)s), but on a per capita basis, these ultra-wealthy donors far exceed their labor union opponents.

The corporate tax credits and 20 years of reduced or no income taxes are the kickers to draw corporate investors to LePage’s “Open for Business” zones. The addition of making payment of union dues optional isn’t really focused on attracting corporate investment, but on reducing the voice and power of workers who might not be among LePage’s biggest admirers.

LePage isn’t alone. Michigan is among the most recent states to have enacted a right-to-work law, making 24 now in the right-to-work camp. Right-to-work legislation has been proposed for Ohio, Missouri, Kentucky, and Pennsylvania, among others. Nonprofits are probably doing their best to duck the issue, particularly since some nonprofits themselves have been the arenas for contentious organizing battles. But nonprofits will be called out on this issue, whether they are willing to join the crowd of conservative governors aiming to weaken labor unions both as advocates for workers and as a voice in politics.

Nonprofits are frequently funded by wealthy people, though many “regular” people, including people who earn their incomes from work rather than investments, support nonprofits through their often quite generous (as a proportion of income and wealth) charitable contributions. Will nonprofits take a stand on proposals like LePage’s or will they look for cover? If they do get called out, what will nonprofits really say on the issue?—Rick Cohen