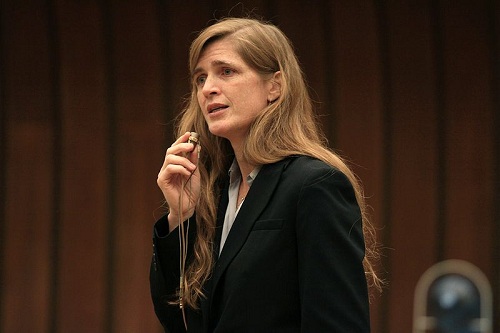 Last year, Invisible Children held a rally in Washington, D.C., that was apparently well attended by young activists, but garnered little attention in the press. The young Invisible Children activists, several of whom we interviewed via Skype chat, were often new to marches and protests but excited by their engagement with IC and virtually swooning over co-founder Jason Russell. Despite the participants’ obvious enthusiasm, the feel was a little desultory—an effort to revive a movement that started with amazing press and profile from the viral “Kony 2012” video, but declined with lackluster follow-up activities, the controversy regarding Russell’s public breakdown, criticism of its finances and its purported Christian evangelist ties, and questions regarding whether the Lord’s Resistance Army (LRA) was still the threat to Uganda that IC maintained. (Joseph Kony and his ragtag army of thugs have been out of Uganda for some years, but are still evidently active in South Sudan, the DR Congo, and the Central African Republic, and there are indications that the regional taskforce led by Ugandan troops with U.S. military advisors has been relatively inactive recently due to political turbulence in the region.)

This weekend begins Invisible Children’s “Fourth Estate Leadership Summit,” which the IC website describes as “a conference for students and educators who want to meet the people, learn the skills, and gain the experiences that will help them make a difference in their own communities and around the world.” There are planned speeches by nationally known figures, skills-building workshops, and, as is key to all major IC events, “an epic dance party.”

The organization is still targeting Kony and the LRA, as is shown by its announcement that a bipartisan collection of 95 members of Congress, led by Representatives Jim McGovern (D-MA) and Ed Royce (R-CA) and Senators Jim Inhofe (R-OK) and Mary Landrieu (D-LA), have written President Obama urging that he continue American efforts “to address the continued violence orchestrated by the Lord’s Resistance Army in Central Africa.” A big step toward keeping the Obama administration committed to the search for Kony can be seen in IC’s recruitment of Samantha Power, the new U.S. Ambassador to the United Nations, to speak at the Summit, although her announced speech topic, “her vision for the role that activists can play in advancing the cause of human rights worldwide,” is broader than IC’s original Kony focus.

But the Summit’s agenda is much broader than Kony. In addition to breakout sessions on the LRA, the program features Hollywood directors explaining the importance of storytelling, and workshops on socially responsible business (“don’t be evil”), empowerment of women and girls, human trafficking, and—despite criticisms early on that IC’s Christian roots had some anti-LGBT linkages that related to Uganda’s vicious anti-gay legislation—LGBT rights across cultures. For a nonprofit with origins in fighting violence in Uganda (the IC purpose is stated on its educators guide as “to bring a permanent end to the atrocities of the Lord’s Resistance Army,”) one Summit workshop was particularly interesting: “32,000 Strong – How TFA is Changing Education in America.” Spotlighting Teach for America in the program would seem to reflect Invisible Children’s finding and nurturing multiple connections and underpinnings for its continuing work.

One of the ongoing Summit activities is the “Common Goods Exchange,” which IC’s press release describes as “showcas[ing] an innovative collection of nonprofits and brands leading the charge in social enterprise.” The Exchange will highlight the work of organizations identified as “partners” on the Summit website, such as Teach for America, TOMs, the Human Rights Campaign, the United Nations Foundation, Rock the Vote, ONE, F*** Cancer, Charity: Water, RELEVANT magazine, Headbands of Hope, Boston Strong, Bradley Mountain, Liberty in North Korea, DoSomething.org, and Honest Tea.

For these sponsors and partners, the Summit gives access to a number of motivated young people (14 is the minimum age for attending) who have submitted applications with information and essays. (One essay topic: “If you won the Nobel Prize for the capture of Ugandan warlord Joseph Kony, what five words would you say?”) But for Invisible Children, these partners, along with such speakers as Ambassador Power and the ubiquitous Dan Pallotta, appear to be contributing to the broadening and mainstreaming of an organization that was once narrowly but popularly identified with chasing the shadowy Joseph Kony.—Rick Cohen

More about: ManagementManagement and LeadershipNonprofit News