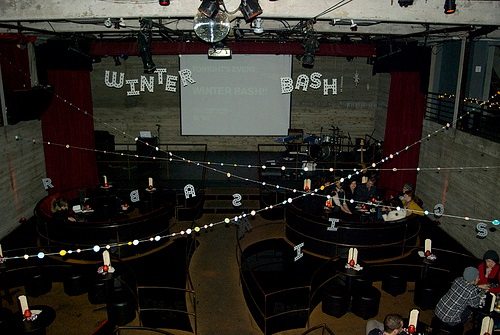 According to Robert Elmes, executive director of the Galapagos Art Space in New York, “A white-hot real estate market is burning through the affordable cultural habitat. And it’s no longer a crisis, it’s a conclusion.” Which is why, just shy of the performance center’s 20th anniversary in Brooklyn, it will close this month, after presenting more than 7,500 arts events that attracted more than a million people over the years. The fate of the venue in Brooklyn’s DUMBO neighborhood is still up in the air, but it is likely to retain some arts programming, according to Gothamist.

But the Galapagos concept isn’t going away—it’s just moving west by about 600 miles.

Elmes says rising rental prices are making it difficult for independent arts organizations to survive in New York. He also notes that many emerging artists are leaving New York for more affordable cities—which is exactly what he and his wife, Philippa Kaye, have decided to do. They are transplanting the Galapagos concept to oh-so-affordable Detroit, where they have bought nine buildings totaling about 600,000 square feet in the city’s Corktown neighborhood and in nearby Highland Park. Elmes is quoted as saying they paid “the price of a small apartment in New York City” for the nine properties, which will take about 16 months to renovate. Plans include a 10,000-square-foot indoor lake—a centerpiece of the large performance space, and an exponentially larger body of water than the 1,600-square-foot lake in the current Brooklyn space; there will also be a smaller performance venue, and the Kunsthalle Galapagos, a 50,000-square-foot gallery and artisan/“maker” space.

The still-wobbly Detroit economy and its artistic community stand to benefit from this rich infusion of cultural activity, which will include a Detroit Biennial exhibition in 2016 in the new Kunsthalle. According to the Galapagos website,

An ambitious survey of the new and important work being produced in Detroit, the Biennial will be focused on growing, nurturing and supporting local artists. In addition, it will provide an opportunity for people outside of Detroit to understand and contribute to the ambitious energy clearly evident in the city.

The website notes that the inspiration for this project comes from Berlin:

For almost fifteen years, post-wall Berlin, Germany, lost population as people voted with their feet and moved west. Only after art and culture made the city interesting to curators and collectors did the city begin gaining population. This outcome was aided by efforts of the German government to attract business and industry to the city, and In turn art and culture helped attract these industrial and business interests.

As that quote suggests, there’s much more at play here than transplanting the Galapagos concept to a more affordable real estate market. Elmes and Kaye are investing in a grand experiment to demonstrate that arts venues can—and ought to be—self-sustaining and most definitely ought to be valued for the positive economic impact they provide. A statement on the website supporting their thesis and explaining the rationale for moving to Detroit is well worth reading. Here are just a few provocative excerpts, each of which provides ample food for thought and rich fodder for arts, civic and business (especially real estate) leaders to consider:

NPQ certainly will keep an eye on this experiment. –Eileen Cunniffe