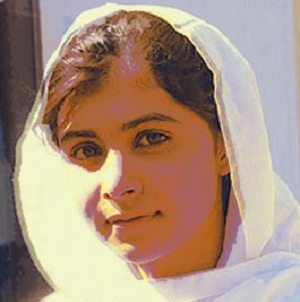 Malala Yousafzai is the youngest person ever nominated for the Nobel Peace Prize. As Tim Craig and Saleem Mehsud write in the Washington Post, “Over the past year, Yousafzai has spoken at the United Nations, had a New York-based charity for girls named after her, was a runner-up for Time magazine’s 2012 Person of the Year and has been honored by dozens of organizations, including the Clinton Global Initiative.”

It is truly impossible to imagine having as much courage as this young woman. As she was nominated for the Nobel, the Taliban renewed its threat to harm her.

“On Tuesday…the group’s spokesman suggested that she would continue to be targeted unless she gives up her ‘secular ideology.’

“If Malala stops the spread of negative propaganda against the Taliban and also stops following secular ideology, the Taliban will not harm her,” said Taliban spokesman Shahidullah Shahid. “And if Malala keeps following secular ideology and continues her propaganda against Taliban and Islam, then [Taliban] fighters will wait for a suitable opportunity to target Malala.”

Ask Salman Rushdie what it is like to have to live under that kind of sword of violence, knowing that these people could try to strike anywhere to carry out their retribution.

Malala’s courage, however, extends to speaking to people of power. This 16-year-old girl joined President Obama and the First Lady at the White House for a conversation and a photo op. President Obama, as we all remember, won the Nobel Peace Prize on his election as President, seemingly for his not being George W. Bush. That was prior to President Obama’s less peaceful decision to do a military “surge” in Afghanistan in late 2009, sending additional troops and firepower into the nation’s longest-ever foreign war. Well over two-thirds of American casualties in Afghanistan have occurred since the President’s surge. And who knows how many Afghanis have been killed in the name of peace?

The courageous Malala Yousafzai looked at the President and told him that his policy of drone attacks was killing innocent civilians in Pakistan and stoking terrorism. In a statement following the meeting, she said, “I also expressed my concerns that drone attacks are fueling terrorism. Innocent victims are killed in these acts, and they lead to resentment among the Pakistani people. If we refocus efforts on education it will make a big impact.” The White House position on drone attacks was clearly stated last year by press secretary Jay Carney: “These strikes are legal. They are ethical and they are wise.”

This young woman is remarkable. It isn’t just that she survived a bullet to the head from the Taliban. It is that she is poised, serious, and obviously committed. She is the example of the Millennial Generation we would like to have as a colleague.—Rick Cohen