Mass Deportation Has Civil Rights Groups Mobilized across the Country 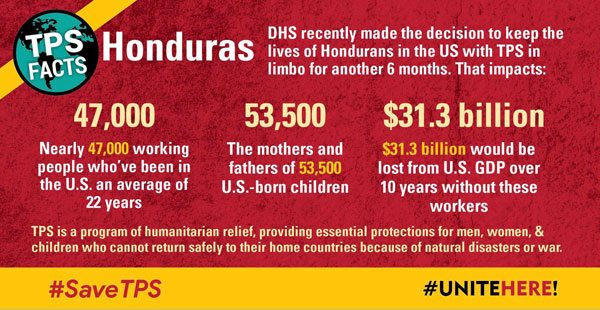 Tens of thousands of Hondurans living in the US face deportation now that Secretary of Homeland Security Kirstjen M. Nielsen has elected to end their Temporary Protected Status. Their departure will cost the US billions of dollars and leave hundreds of thousands of children in limbo. Civil rights groups, including the ACLU, Boston-based Lawyers’ Committee for Civil Rights and Economic Justice, and the Church World Service are fighting the decision, claiming it is based on racial animus.

The Immigration Legal Resource Center says there are 70,281 Hondurans who currently hold TPS status in the US, which was initially granted after Hurricane Mitch struck Honduras in 1998. On January 5, 2020, they will be forced to leave. NPQ reported in November that Haiti’s TPS status had been revoked, which was a blow to US citizens, businesses, and nonprofits. Since then, the severity of the problem has only grown. Honduras joins Haiti, El Salvador, and Nepal among countries whose status DHS has declined to renew, affecting over 300,000 people.

“I did everything right: I worked hard, started a company, had two children and made investments here,” Samuel Contreras, a licensed contractor on Long Island, told the New York Times’ Miriam Jordan. “The bank approved a $300,000 mortgage because I have good credit and income. Now I don’t know what will happen.”

A paper from Robert Warren and Donald Kerwin in the Journal on Migration and Human Society estimated that TPS recipients from Haiti, Honduras, and El Salvador have 273,000 children who are US citizens. Those children will either be left in the US without their parents or brought to unfamiliar countries with high crime rates and few resources. Though Hurricane Mitch was the catalyst for granting TPS status, the United Nations Office of the High Commissioner on Human Rights documents “chronic and recent human rights concerns,” particularly since the November 2017 elections.

The Immigrant Legal Resource Center also estimates that the deportation will cost the US $3.1 billion and result in a $6.9 billion reduction in payments to Social Security and Medicaid.

Communities where affected populations live aren’t happy about it either. “This can’t be,” said Cristiane Rosales-Fajardo, founder of NOLA Village in New Orleans. “[Hondurans] rebuilt our houses and the city after Hurricane Katrina. When nobody wanted to come, they were here bringing New Orleans back to life.”

TPS has to be renewed every 18 months for all those granted its protection. The lawsuits from ACLU and others claim that DHS’s choice to stop renewing it “should be set aside as unconstitutional and contrary to federal law,” because they say it is based on the administration’s desire to deport people of color. The suit from the Lawyers’ Committee for Civil Rights and Economic Justice claimed that “Defendants’ stated reasons for terminating TPS for Salvadorans and Haitians ignore these conditions and are nothing but a thin and pretextual smokescreen for a racially discriminatory immigration agenda—one that the president has been astonishingly blunt about articulating.”

The Lawyers’ Committee filed on behalf of eight individual plaintiffs and Centro Presente, a member-driven Latin American organization dedicated to advancing immigrant rights and leadership in Massachusetts. Patricia Montes, a Honduran immigrant who is the executive director of Centro Presente, said to Amy Goodman at Democracy Now!,

Honduras, as a country, is not ready to receive people that are being deported from the US…Honduras is one of the most violent countries in the world. And earlier this year, the United Nations Economic Commission for Latin America and the Caribbean declared that Honduras is the most poor country in Latin America, displacing Haiti. Unfortunately, the U.S. government, under the Obama administration, supported [the 2009] coup d’état. And that coup d’état had—you know, after that coup d’état, we have a lot of systemic violations in the country.

Sonia Paz, 55, said, “I have nothing in Honduras. To go back would be the kiss of death.”

Faith leaders also oppose the deportations. Over 600 faith leaders connected through the Church World Service sent a letter to DHS asking for another 18-month extension “based on moral and legal principles. As people of faith, we are called to provide hospitality and protect those who are in need of safety,” they said. The Chicago Religious Leadership Network on Latin America (CRLN), in addition to signing the CWS letter, started their own petition to support H.R. 4253, a bill to grant permanent legal status to TPS holders. The Honduran government has also said it will help its citizens seek a way become legal residents of the US.—Erin Rubin

More about: Disasters and RecoveryImmigrationNonprofit NewsPolicy