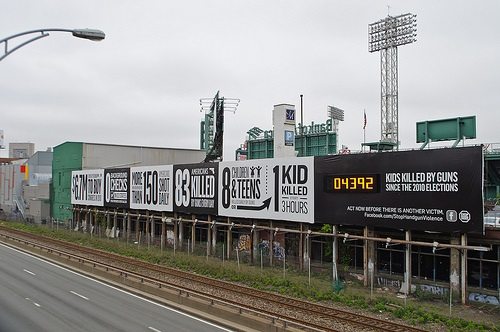 Boston is famous for its landmarks, which include the now-famous neon CITGO sign. Maybe the 252-foot-long billboard along the Mass Pike that has been advocating gun control for nearly 20 years should be given some kind of protected status?

Most of the 150,000 drivers a day traveling east into Boston on the Massachusetts Turnpike know to expect the 252-foot-long in-your-face billboard that reminds you that YOU have a responsibility to end gun violence. Right now, it reads, “45,864 Americans killed since the massacre at Sandy Hook.”

And then, “Assault weapons have stopping power. Fortunately, so does your vote.”

The messages change approximately yearly, but they are always provocative. The billboard has been there as a beacon to social action on the issue since 1995, when John Rosenthal, a real estate developer, installed it on the side of a parking garage he owned. Rosenthal is a co-founder of Stop Handgun Violence, the nonprofit that sponsors the sign.

Next March, however, the billboard is slated to be taken down by the parent company of the Boston Red Sox, which bought the
garage in 2013.

“I’m hopeful that we’ll find a property owner who shares our concern about gun violence,” Rosenthal said. “We cannot afford to pay a high rent, and the billboard will just cease to exist if that’s the only option.”

Rosenthal is now looking for another property owner who would host the massive digital sign, and he is supported in this by new mayor Marty Walsh, who called the sign “an eye-opening reminder of the tragedy of the crimes being perpetrated with guns across our nation.”

House Speaker Robert DeLeo, a Winthrop Democrat and a supporter of gun control, comments, “There is not a time when, if I’m on the Pike or walking to the ballpark, I will not look at that billboard…It’s very simple, but I can’t think of another more powerful [sign] that I’ve ever seen.”

Rosenthal will surely find a place for his message. He has a lot of powerful friends and admirers—like Don Law, a concert promoter who thinks that the billboard has helped shape the debate in Massachusetts, where gun licensing requirements were tightened in 1998.—Ruth McCambridge