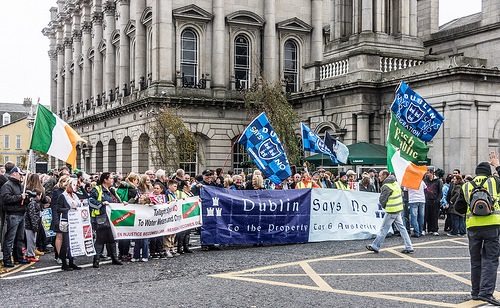 Though paying for water separately may be the standard in the United States, the same is not true in Ireland, where more than 120,000 people protested Saturday in 100 different demonstrations against newly imposed charges. The demonstrations occurred right across the Republic of Ireland and many occurred in pouring rain. This is the second demonstration on the matter and more are planned if the scheme is not rethought.

These protests come just a few weeks after the UN visited Detroit and said that the Detroit water shutoffs were a violation of human rights.

There were approximately 20 demonstrations in Dublin alone, where large crowds descended on the Dublin city center, blocking the O’Connell Bridge and closing O’Connell street. Approximately 1,000 protesters marched from Clondalkin, meeting with with another group who began their march in Lucan.

The water charges are part of an austerity plan. Irene Murray from Dublin City said that the protestors wanted to send a message to government that the people want the water charges dropped. “A lot of men and women with children, they just can’t take anymore,” she said.

Among the signs seen was, “From the river to the sea, Irish water will be free.” In Tullamore, anti-water-charge protesters carried a coffin through the streets to symbolise the death of Irish water.—Ruth McCambridge