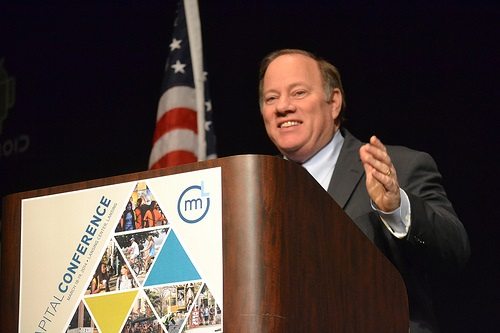 In Detroit, it may be that the more things change, the more they stay the same, at least when it comes to the Water Department. With Mayor Mike Duggan’s accession to power over the Detroit Water and Sewerage Department (DWSD), maybe things will finally change, but the proof will be in the flow of water from the taps of tens of thousands of low-income Detroit Water customers who have been threatened with water shutoffs due to outstanding bills as low as a few hundred dollars.

Last week, Mayor Duggan announced a 10-point plan to get more residents to pay up while providing assistance to those water customers who needed help due to their low incomes. The elements of the plan include the following, most of which is pretty obvious, raising questions as to what might have been going through the minds of the Water Department’s leadership and emergency financial manager Kevyn Orr up to this point. (Comments and elaboration from NPQ are in parentheses.)

Detroiters who are facing water shutoffs and the nonprofit leaders who have helped bring this crisis to the attention of President Obama (with no noticeable corresponding action, by the way) and even the United Nations should tell Nonprofit Quarterly whether they think the mayor’s plan is going to make a substantive change in the Detroit water crisis or is simply a kinder, friendlier veneer for the department’s efforts to clear itself of mostly residential delinquencies.

The city’s larger agenda is still garnering suspicion in many quarters. After the debacle of how Detroit Water handled this crisis, the chief of the department, Sue McCormick, is still on the job. In other scenarios comparable to having turned the delinquent water bills of poor people into an international incident, McCormick would have been sacked.

Nothing in the plan addresses what we confidently suspect is a problem of inaccurate bills due to Detroit’s longstanding problem of leaking mains and leaking connector pipes. That is actually why the State of Michigan has been the largest delinquent customer of the Water Department, challenging the bills themselves. The plan also doesn’t address the additional fact that Detroit’s water rates are significantly higher than the national average, making affordability a problem for many residents. The mayor’s 10-point plan accepts the current bills as essentially accurate starting points for determining whether customers will have their running water turned off.

There is also suspicion that the Water Department’s longstanding exploration of privatization is supported by the Mayor. Sharda Sekaran, a co-founder of the National Economic and Social Rights Initiative, recently wrote that Duggan’s history of supporting privatization—in his case, the sale of the nonprofit Detroit Medical Center to a for-profit hospital conglomerate in Virginia—raises questions about the future trajectory of Detroit’s public water system. As the NPQ Newswire has noted, the history of turning public water systems over to private corporations has not been particularly successful, both here in the U.S. and overseas.

While the mayor’s plan was being rolled out for the public, in the bankruptcy court, the Water Department was proposing a possible strategy for dealing with the $5.2 billion in water and sewer revenue bonds it owes bondholders, aiming at getting bondholders to tender their debt in order to allow the City to go to the bond markets for refinancing. NPQ will keep an eye, to the best of its ability, on the Water Department dynamics that might or might not lead to changes in the protections afforded to Detroit water customers.—Rick Cohen