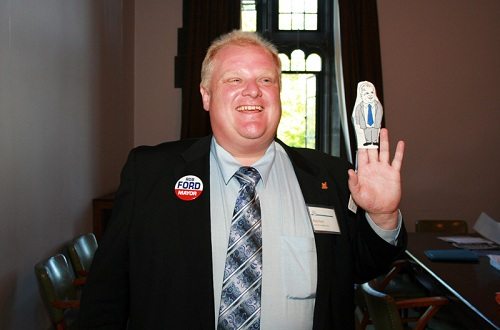 It seems kind of difficult for Canadian cities to match the zaniness of the politics of some American cities, and that isn’t even to use the New York City mayoral candidacy of serial sexter Anthony Weiner. What city can compete with Washington, D.C., where the city council just censured four-time former mayor, now city council member Marion Barry, who remains in office despite his televised crack cocaine bust (earning six months in prison), his conviction for failing to pay state and local taxes (three months probation), accepting cash payments from developers and contractors, and spewing all sorts of racist venom against Asians and others.

Hooray for Toronto, Canada, and its mayor, Rob Ford! He’s almost right up there in the Marion Barry category of elected officials. Among his controversies as both a council member and then mayor are racist comments toward Asians (“the Oriental people, they’re slowly taking over”), opposition to bicyclists (“Roads are built for buses, cars, and trucks, not for people on bikes”), incidents of driving while texting, and plenty of drug use, particularly marijuana—by his own admission, “a lot of it.”

It is in the latter category that takes Ford awkwardly into the realm of charity and philanthropy. This past spring, a video began circulating that purported to show Mayor Ford smoking crack cocaine in a glass pipe. Ford vehemently denied that he was in the video, but it seemed to many to clearly show the 300-pound mayor with a glass pipe and lighter, having a good time.

Whoever made the video of the mayor began shopping it around to various media sources, including the U.S. gossip blog, Gawker. To raise money for the purchase, Gawker started a crowdsourcing fundraising effort called “The Rob Ford Crackstarter.” Gawker’s goal was $200,000, which it raised in only 11 days, but then there was a problem with the video itself. The anonymous source was unable to deliver the video, leaving Gawker with a couple of hundred grand.

In concert with the theme of the video, Gawker converted Crackstarter into a charitable effort, distributing the funds to four Canadian charities with programs targeting drug abuse. The total Crackstarter fundraise—$201,199—was reduced by $16,416 in processing fees, leaving the four charities with gifts of approximately $46,000 apiece.

One recipient, the Somali-Canadian Association of Etobicoke, plans to use its Crackstarter gift to start a program to keep Somali youth away from Toronto gangs. $46,000 isn’t sufficient to get the program going, so the City of Toronto and the Ontario Trillium Foundation are working with the Somali-Canadian group to come up with the other necessary funding. South Riverdale Community Health Centre and Unison Health and Community Services will use their Rob Ford Crackstarter money for helping people with substance abuse issues, and the fourth recipient, the Ontario Regional Addictions Partnership Committee, will train counselors to work with Aboriginal Canadians in the province with addiction issues.

It may be better in the end that Gawker, rather than Mayor Ford, handled the charitable distribution of the Crackstarter funds. Back in 2008, the Rob Ford Football Foundation was established and immediately started collecting donations from lobbyists representing businesses with financial interactions with the city. In late 2009, then-councilman Ford used city letterhead to solicit contributions for the foundation—and included in the letter promotional materials for Ford’s family-owned business, Decal Label and Tags. After his election as mayor, Ford was hit with litigation demanding that he repay the donations from lobbyists as a conflict of interest. He refused, and within Canadian law, Ford seems to have escaped an appearance with the Canadian Supreme Court due to a legal technicality regarding whether the law allowed for authorities to force Ford to repay the ethically questionable donations as opposed to other kinds of penalties.

At least in the Crackstarter case, the mayor’s alleged crack cocaine use will lead to a surprise bounty for four Canadian anti-drug nonprofits.—Rick Cohen