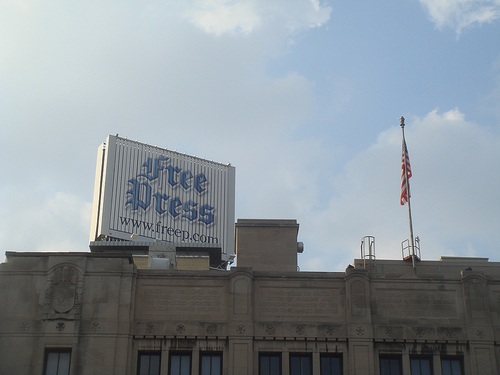 In a recent editorial about the Detroit Free Press’s decision to partner with nonprofit Bridge Magazine, editorial page editor Stephen Henderson notes that it follows an aspirational tradition at the paper set by “legendary” Free Press editorial page editor, Joe Stroud. As Henderson explains it, for Stroud, the vital importance of strengthening the state’s schools, colleges, and universities made editorials about state taxes regular features of the Free Press’s editorial section as far back as the early 1990s. As a way to extend this underlying focus on “a better Michigan” and boost the media engagement of current residents of the state, the paper announced its content sharing partnership with Bridge Magazine, along with related partnerships with public television and radio stations and nonprofit Data Driven Detroit .

As part of Henderson’s effort to re-energize the Freep’s editorial page, he launched the A Better Michigan website as a central place to find new blogs about the city’s future, along with an entire section devoted to “Raw Data,” which “will take key statistics—about education or poverty or economics—and put them in the context of Michigan’s challenges and opportunities.” In a change that his predecessor, former Freep editor Joe Stroud, might not have envisioned in the 20th century, the new website will also stream Facebook and Twitter postings. In his announcement of the changes, it’s noteworthy that Henderson highlights the acclaimed investigative series by senior writer Ron French on municipal bankruptcies in California (and the applicable lessons for Detroit) as a continuing feature on the new site.

In a somewhat related development, The Center for Investigative Reporting also announced this week that it will publish California Watch and The Bay Citizen under its brand beginning May 29. Reporting on the consolidation in a recent story, Poynter cites Editorial Director Mark Katches’s blog post about related changes with editorial policy. “Last year, we generated about 1,000 stories. By choice, we expect to produce about 200 stories this year.” Katches added, “But the stories we go after will be the ones we think can make a difference.”—Anne Eigeman