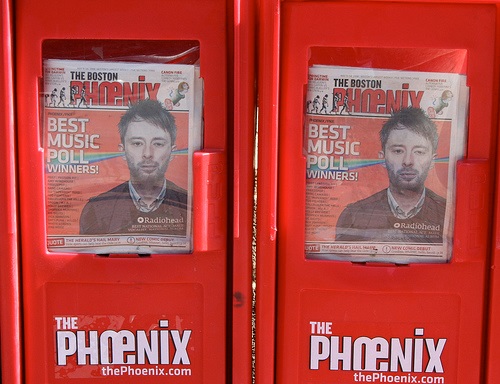 So reads a farewell tweet from the Boston Phoenix, an iconic, 47-year-old, largely progressive alternative news source. The Phoenix is not a nonprofit, but it has definitely been a force in civil society, providing a platform, according to one columnist, for covering politics and culture in a way that spoke to those “who  believed that powerful institutions and other engines of society deserved a kind of scrutiny that went beyond mere reporting, and who wanted to see the fundamental ills of the social order exposed.” It launched a number of powerful journalistic careers and garnered a number of journalistic awards but, more than that, it was a tradition in Boston and Boston is shocked that it is gone!

Getting the business plan right can be very difficult for publications, even those with wider circulations; it involves fitting together puzzle pieces with a lot of risk embodied in each decision. The Phoenix has reportedly experienced a fatal drop in its national advertising base. It had hoped to recover the lost ground through a switch to becoming a glossy magazine but the clock ran out. WFNX.com, the Phoenix Media/Communication Corp.’s online radio station, is also shutting down.

According to Tiffany Shackelford, executive director of the Association of Alternative Newsmedia, it appears that alternative publications in smaller markets may have an easier time surviving than those in larger markets like Boston. Shackelford’s point seems to be exemplified in the fact that Boston Phoenix spinoffs the Providence Phoenix and the Portland Phoenix will go on in Rhode Island and Maine, respectively.

In a statement to Boston Phoenix employees, owner and publisher Stephen Mindich said:

“What I can and will say is I am extremely proud, as all of you should be, of the highest standards of journalism we have set and maintained throughout the decades in all of our areas of coverage and the important role we have played in driving political and socially progressive and responsible agendas; in covering the worlds of arts and entertainment, food and fashion – always with a critical view, while at the same time promoting their enormous importance in maintaining a healthy society; and in advocating for the recognition and acceptance of a wide range of lifestyles that are so valuable for a vibrant society.

And finally, at least for this moment, I want to thank all of you – and the literally thousands of women and men before you, for lending your talents to our mission over the past 47 years – as I have always said – our staff has been our soul.

And obviously as well, my sincere gratitude to our millions of readers and tens of thousands of advertisers without whom none of what we did accomplish could have been possible or meaningful.

So, that’s it. We have had an extraordinary run.”