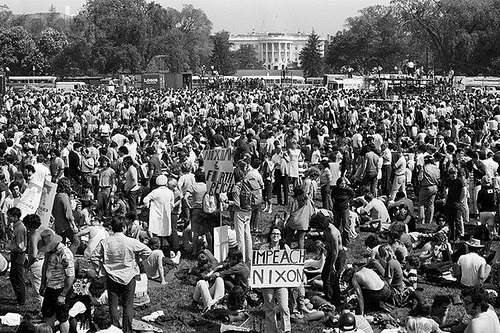 Tom Hayden talked about the politics of memory at the “Vietnam: The Power of Protest” program at the New York Avenue Presbyterian Church in Washington, D.C. The former state senator and former Chicago Seven defendant referenced the forces that stand for denial and historic cleansing. He was talking about generational denial, but it seems that forgetting happens all the time, that our nation wipes out memories and lessons in increasingly shorter timeframes so that we forget what we learned last year, last month, not just 50 years ago at Selma, Seneca Falls, and Chicago.

Fifty years ago, Martin Luther King Jr. was denounced in the mainstream press such as the New York Times and the Washington Post for forgetting his place, for linking the civil rights movement to the opposition against the Vietnam War. Even within the civil rights movement, King garnered criticism that he was attracting unnecessary opposition, watering down his efforts, and should “stay in his lane.” In truth, King knew deeply that the war in Vietnam, which consumed tens of thousands of American young people, particularly Blacks and Latinos, for most of the war, was going to undermine progress on civil rights and social justice here at home.

Hayden, Heather Booth, and many others have made the point explicitly that it isn’t just American deaths that counted, but the three million Vietnamese, Laotians, and Cambodians who died during the Indochinese wars. It’s like the war in Iraq: The U.S. press kept a running tabulation of the names of American and even “coalition” soldiers who were killed, but so often ignored the hundred times more Iraqis who died in combat or in civilian strife—and who continue to die today. In addition to Hayden’s concern for historical denial, he might also have talked about our national solipsism; today, the nation opposes American “boots on the ground,” but seems all too comfortable with more antiseptic campaigns waged through supporting and funding surrogate armies, dropping bombs from great heights, conducting warfare by drones controlled by computer room joysticks, and, as moderator Phil Donahue observed during the event, attacks that can be launched now as “signature strikes,” authorized by presidential signature.

The absence of the late Howard Zinn was palpable. Cora Weiss, an octogenarian still active in the peace movement, said that we have to teach peace in schools. Dave McReynolds, the radical pacifist from the 1960s antiwar movement, added that we have to teach “all” history—that is, the history that isn’t taught much or, often, at all. That was Zinn’s role in our society, and his passing in 2010 is still felt.

But that is the challenge of this program, whose brochure depicted on its cover an antiwar march led by Martin Luther King Jr. accompanied by Dr. Benjamin Spock. Like King, Spock was also told to stick to his childrearing advice business, and he did lose much public support by straying from his lane.

Hayden mentioned that politicians of that era were advised to steer clear of the peace movement, afraid of being seen as soft. Now, when leaders of both parties talk about American military muscle and exceptionalism, overcompensating for the disgraceful way the nation greeted the returning veterans of the Vietnam War, there is an odd sense of glorifying military service in Iraq and Afghanistan, as though that service truly kept Americans on the home front safe. In truth, the U.S. was never under threat from Saddam’s Iraq, and U.S. military action in Afghanistan and Iraq has led to an escalation in international terrorism reflected in the various offshoots of Al Qaeda, including the Islamic State. That doesn’t dishonor the service of veterans of the Iraq and Afghanistan wars, but helps us to more correctly understand the U.S. role in these foreign military ventures.

Something seems out of balance in the lessons of Vietnam, and part of that comes from realizing that, like the participants in this event, it’s the same people talking among themselves. We expected the event would be infused with young people eager to learn from the presence and words of Julian Bond, the SNCC organizer in those days who was elected to the Georgia state legislature and then denied his seat (most recently, he was the chair of the NAACP board), former Representative Ron Dellums who represented the East Bay of California and was a prominent antiwar voice in Congress, and Daniel Ellsberg, who expected a life sentence for his release of the Pentagon Papers. (Ellsberg told the wonderful story of his 10- and 13-year-old children in 1971 helping him photocopy the Pentagon papers, with his 10-year-old daughter cutting the words “Top Secret” off the pages.)

If Millennials and Gen X’ers had been at the New York Avenue Presbyterian Church, where 50 years ago Martin Luther King Jr. had spoken from the dais, what might they have learned to take back to their work today?

They might have discovered that the antiwar movement led to the creation of an infrastructure of organizations that continue to promote social change, recognizing that U.S. foreign policy issues are replete with domestic political implications. Among the people with peace movement roots who stood in the church ready to explain where they were today were founders and key staff of such organizations as the Food Research & Action Center and Families USA (Ron Pollack), the Campaign for America’s Future (Roger Hickey), and a social justice charter school in East Los Angeles (Roger Lowenstein). The values and motivations of the antiwar activists weren’t those of “serial entrepreneurs,” as is the fashion of today, but serial activists who saw sexism, racism, and militarism as mutually reinforcing and in need of consistent, concerted action.

The younger people, had they been here in numbers, might have noted that there wasn’t one large superstructure for the antiwar movement in the 1960s and the 1970s, but an infrastructure made up of many organizations around the country, both local groups and a few national ones. In the course of the two days of the “Lessons of Vietnam” program, it was clear that the antiwar movement comprised and has always comprised a variety of organizations, even if some might have wanted a more all-encompassing role. Among the organizations that were in (or involved in) the antiwar movement were the Institute for Policy Studies, which is still active, the Student Nonviolent Coordinating Committee, Students for a Democratic Society, the Indochina Resource Center, Clergy and Laity Concerned, the War Resisters League, the American Friends Service Committee, and scores more. Oddly, despite the often prolonged and seemingly interminable meetings of the coalitions in which they functioned, they were able to act and get things done.

A third thing they might have gotten from their Vietnam era elders was the importance of protest and direct action. Daniel Ellsberg reminded the audience that President Nixon had been, unknown to the public, contemplating the use of nuclear weapons against North Vietnam, what he called the “November Ultimatum” slated for November 1969, but t