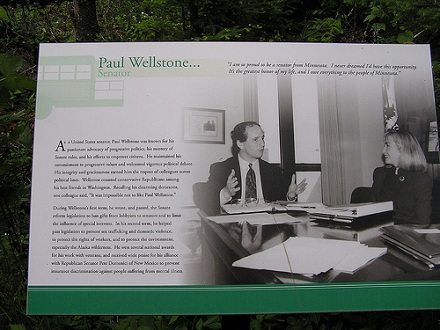 As any good advocate knows, passing a law is only one step towards changing a bad practice. Implementation can take as much or more effort. So it is with the four-year-old Health Parity and Addiction Act.

Ten years ago today, Sen. Paul Wellstone and members of his family were killed in a plane crash. Now, Paul David Wellstone, the late senator’s son, is emerging from a long period of retreat to take up a cause long championed by his father. Wellstone had been long dead by the time President George W. Bush signed the Paul Wellstone & Pete Domenici Mental Health Parity and Addiction Equity Act into law. The parity law would require insurance companies to provide the same levels of coverage for mental illness as for other types. They would not be allowed to charge higher deductibles or cap payments at a lesser level. But now, four years later, implementation of this important law has stalled. No regulations have been promulgated and no enforcement mechanisms have been put in place.

Some reports suggest that President Obama is not pursuing implementation of this law aggressively because he does not wish to use the capital required when his signature health care reform implementation is pending but apparently former Rep. Patrick Kennedy (D-R.I.), son of the late Ted Kennedy, another sponsor of the bill, and former Sen. Jim Ramstad (R-Minn.) are unwilling to let the issue fade and are reportedly on the issue “like a bad rash.”

But according to columnist Christine Stapleton, who writes about depression, “[t]he bad news is that the insurance companies aren’t giving up, either. They have a wily stable of well-paid lawyers who have done a fine job of dissecting the Parity Act. They have found every whiff of a loophole and are devising ways to jump through and expand each one. Their power to stall, stymie and litigate away the implementation of parity is truly impressive in a diabolical kind of way.” She writes that the insurance companies count on stigma to keep consumers fairly quiet about the whole thing.

Wellstone intends to create a nonprofit to pursue implementation of the parity act and is unembarrassed about drawing on the respect people had for his father. “My dad was well-respected, well-loved,” Wellstone said. “So if my name is Paul Wellstone Jr., I can use a nonprofit to make sure the law we passed in his name has teeth and is being followed. That, at least for me, brings some meaning to everything.”

This effort will be the second nonprofit that will carry forth the legacy of Wellstone. Wellstone Action, founded less than a year after the plane crash, provides training for political action with some programs specifically targeting American Indians, labor and students. “Paul knew if you didn’t have a good idea and an organized base, there wasn’t much you could do,” comments Ben Goldfarb of Wellstone Action. Wellstone Action will conduct 160 training workshops in 30 states this year alone with 18 full-time workers and many volunteers. –Ruth McCambridge