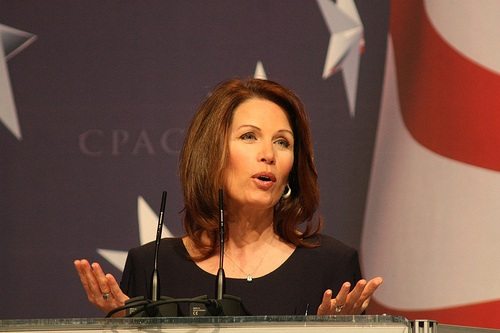 What would make Rep. Michele Bachmann (R-MN) announce midway through 2013 that she would not run for reelection in 2014?

Michele Bachmann is as well known for her misstatements—factual and analytical errors in her public pronouncements—as her dearth of legislative accomplishments. The former presidential hopeful, who might briefly have thought she was the real thing after winning the Iowa caucuses and knocking former Minnesota governor Tim Pawlenty out of the race, ended up almost a Herman Cain-level punchline by the end of the primaries. After giving up her presidential aspirations, she nearly lost her reelection to Congress. More recently, her presidential campaign has been under scrutiny from the FBI and the Federal Election Commission. But for her acolytes, those things seem inconsequential; her role in the creation of the Tea Party Caucus in the House of Representatives eclipses all that.

But none of this is news; there’s nothing that surfaced overnight—Bachmann issued her statement in a video at 3:21 AM on Wednesday—to cause her to announce she wouldn’t run for reelection several months before any announcement would have been necessary, especially as she’s already started running reelection ads. In recent weeks, with the somewhat-moribund Tea Party getting a brief resuscitation from the IRS political targeting controversy, it would have seemed to be Bachmann’s moment of glory, a time for “I-told-you-so” posturing and playing out little-guy victimhood against the power of a big, centralized, intrusive federal government. So why bolt?

Some of this feels a little like former Alaska governor Sarah Palin’s surprise midterm decision to bolt the governor’s mansion in Juneau. Ideologues like Palin and Bachmann, and perhaps their counterparts on the left, sometimes rise to political heights to promote an idea or vision, rather than to get something done and see through the boring mechanics of implementation. Bachmann’s major policy agenda was to get something undone: the repeal of “Obamacare.” But national health care reform, whatever one makes of it, is a reality and going forward without regard to Bachmann’s repeated attacks. Unlike Palin, who simply took a walk, Bachmann has pledged (at least at this moment) to serve out the remainder of her term.

Or maybe this is a response to the loss of the Tea Party’s limelight. Although Bachmann has been rallying Tea Partiers to call for President Obama’s impeachment over the IRS controversy, her star in the far-right-wing firmament seems to have been outshone by others in Congress, particularly Harvard Law School grad Senator Ted Cruz (R-TX), who shares Bachmann’s penchant for tossing rhetorical bombs at fellow Republicans, but seems to do it with more aplomb.

Our read is a bit different. Although Cruz and some others march to the drum of the defense of the Second Amendment against imagined encroachments, and Republicans in Congress like Rep. Darrell Issa (R-CA) are having a field day attacking the Obama Administration on Benghazi, the IRS, and Attorney General Eric Holder, it may be that, as with Palin, politics has passed Bachmann by. State after state now allows same-sex marriage, anathema to a woman whose psychologist husband specialized in saving gay people from homosexuality. Bachmann was a diehard opponent of immigration reform, but even Tea Party favorite Sen. Marco Rubio (R-FL) is shepherding a version of immigration reform through Congress. Tea Partiers are doing their best to find the fountain of political youth in the IRS issue, but their rallies (here and here and here) feel strained and desperate.

It may be that Bachmann’s time is over, and so is the Tea Party’s, in light of a changing political and social demographic. Perhaps Bachmann’s decision was helped by the FBI and the FEC, but after the Republican primaries, she seems to have been an anachronism, failing to advance her own issues, much like the Tea Party’s ability to undo its own potential by engineering the nominations of candidates to lose otherwise Republican-winnable seats. We wouldn’t bet on her taking up the Palins’ reality television aspirations, but you can expect to see Bachmann next as an instant-news commentator.—Rick Cohen