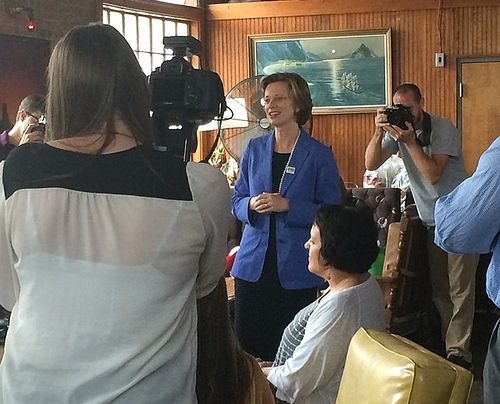 Whether one supports or opposes the candidacy of Michelle Nunn for the U.S. Senate seat in Georgia, Nunn’s apparent dismissal of former president George H.W. Bush’s request that she drop him from her campaign ads is a little unsettling.

Nunn headed the Points of Light Foundation under Bush I and has used Bush’s name and image in her ads to indicate her admiration for the former Republican president and her ability to work with people of both political parties. Bush’s people don’t like Nunn’s use of Bush in her campaign. According to Bush spokesman Jim McGrath, “Michelle and her team have been clearly, repeatedly and consistently told that President Bush did not want them to use his photo as part of this campaign. Apparently, the Nunn team feels they can repeatedly disregard the former president’s wishes, which is very disappointing because it’s so disrespectful.” However, Bush son (and George and Jeb brother) Neil Bush, who served as chairman of the Points of Light Foundation board, has defended Nunn against Republican attacks, though not specifically about the request of his dad regarding the campaign ads, saying that Nunn (the daughter of Georgia Democratic Senator Sam Nunn) teamed up well with him and “worked the nonpartisan side of the job pretty well.”

With its emphasis on volunteerism, a policy that politicians of both parties find little in to criticize, the Points of Light Foundation maintains a powerhouse board populated by current and former politicians plus a number of nonprofit leaders. As of February 2014, according to GuideStar, the board included Ray Chambers (the conservative Republican financier and chair of the Amelior Foundation), Dave Eisner (formerly the head of the AOL Foundation and of the Corporation for National and Community Service under Bush II), Boyden Gray (the former council to George H.W. Bush when he was vice president and a member of the board of the Tea Party-supporting FreedomWorks), and Artur Davis (former Democratic Congressman from Alabama who shifted to the Republicans in 2012)—and, of course, Neil Bush. Because of the “Points of Light” nomenclature, it may be that prominent Democratic politicians were somewhat more averse to signing on as trustees, though former Pennsylvania senator Harris Wofford, one of the nation’s top boosters of volunteerism and of AmeriCorps, was on the board into 2009.

Despite the somewhat Republican cast of politicians on the Points of Light Foundation board, the organization under Nunn’s leadership has scored well with federal grants made available from both Republican and Democratic administrations, receiving around $119 million in grants and other assistance from the Corporation for National and Community Service alone between FY2000 and FY2014, as shown on USAspending.gov.

Assume, as we fully expect, that Points of Light under Nunn was nonpartisan. It would have been completely foolish for her to have mucked around with putting a nonpartisan (c)(3) into the partisan political realm given Nunn’s long history as the recipient of hints from Democratic leaders that she ought to run for something in the rock-ribbed Republican environs of Georgia, not to mention her identity as the daughter of a conservative Democrat who, if we recall correctly, never had the whiff of personal or political scandal associated with him. President George H.W. Bush has endorsed Nunn’s opponent for the senate seat, which may make him squeamish about this appearance in Nunn’s ads, but the message Nunn is portraying is, like Neil Bush admitted, pretty accurate: She worked well with Democrats and with the GOP as she piloted the Points of Light Foundation as a centerpiece in the nation’s volunteerism and stipended volunteerism infrastructure.

The policy agenda of Points of Light, significantly carried out in partnership with Service Nation, which Points of Light co-founded, geared significantly toward supporting and expanding national service programs such as AmeriCorps. The Service Nation strategy reflects a political analysis of what ought to be done to address social problems in this nation. As the former leader of Points of Light, Nunn can demonstrate that she worked with presidents and politicians of both parties. Supporting and promoting such programs as AmeriCorps, the Senior Corps, and the Serve America Act, Nunn is a policy advocate of volunteer-oriented programs that have garnered support from the likes of Senator Orrin Hatch (R-UT) and the late Ted Kennedy (D-MA). Nunn’s resume reveals the kind of politician Nunn is presenting herself to be, promising to work across party lines to break the logjam in Congress.

Truth is, Michelle Nunn did work with former President George H.W. Bush; if President Bush has endorsed her opponent, so be it. Let the voters of Georgia figure out whether Nunn’s focus on volunteerism and service is the right agenda for the state and the nation.—Rick Cohen