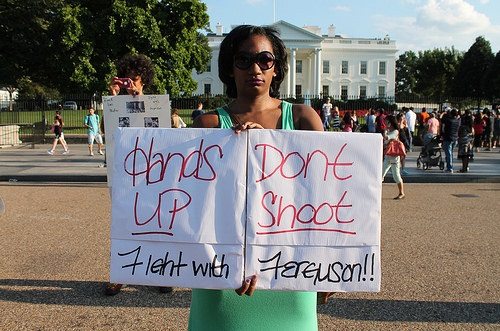 It took five days for the governor of Missouri, Jay Nixon, to show up in Ferguson as the small city in St. Louis County exploded in protest due to the police shooting of an unarmed African-American teenager.  Can you say “missing in action”?  It’s not great optics either for President Obama to be issuing an occasional statement from his vacation in tony Martha’s Vineyard (where Attorney General Eric Holder is also vacationing), but not showing much more engagement that Governor Nixon in the shooting.  At least today, Thursday, the President spent a couple of minutes personally calling for calm in a very brief press conference.

The killing of young Mike Brown in Ferguson is the latest horrific example of the danger of being young and black.  It is different, however, than the death of Trayvon Martin, whose killer imagined himself some sort of neighborhood vigilante patrolling the streets against black teens wearing hoodies and carrying iced teas, the death of Jordan Davis, whose killer chose to volunteer his services against black kids playing loud music, and the death of Renisha McBridge, whose killer shot the 19-year-old student and auto worker in the face through a screen door because she made the mistake of seeking her killer’s help by knocking on his porch door after she was in an auto accident.

Mike Brown was killed by a policeman, with mounting eyewitness evidence that the recent high school graduate was unarmed, not threatening the police, clearly not shooting at police, and trying to surrender with his hands in the air as an unnamed policeman pumped some bullets into him in the middle of the street—and letting his body lie there for an extended period of time, reportedly four hours, while the police officer involved in the shooting was quickly whisked away.  This was a killing of an unarmed black teen under the cover of government action, in a two-thirds black city with a white mayor, white police chief, white fire chief, almost completely white police force (only three African-Americans in a 53-person force), and an almost completely white city council (five out of six white).

Can you say, “democracy”?  Can you say “justice”?  There are some big problems in Ferguson that demonstrate a lack of leadership at all levels of government—all of them, top to bottom.

But what about the nonprofit sector?  How are we doing on Ferguson?  Nonprofits from around the nation have descended on Ferguson to monitor or participate in the protests occurring nightly against an unbelievably aggressive, militarized Ferguson police force.  What about Ferguson’s indigenous nonprofits?

With a population of about 21,000, Ferguson is a small city in St. Louis County, one of over 90 incorporated municipalities in the sprawling suburban area.  The county has a population of roughly 1 million, which does not include the additional million people living in the city of St. Louis which is independent of the county.  Unlike the majority black Ferguson, St. Louis County is 70 percent white, while the city of St. Louis is roughly half black.

How might a city of over 20,000, half African-American, end up with virtually no African-American representation in the infrastructure of the local government?  How can the police of this city—and since the protests, the county—show up armed to the hilt, equipped with tactical gear, looking for all intents and purposes like an occupying military force, making the protestors look and feel like “the enemy”?  Maybe the unparalleled anger and the community trauma of so many citizens of Ferguson can be related to the thuggish reaction of local police dressed like Robocop looking like they’re patrolling Fallujah or Kirkuk instead of a suburb of St. Louis.  It doesn’t fit the announcement on the official Ferguson municipal website that proudly announces that the city has been proclaimed for the fourth year in a row as “Playful City USA Community”.

A local community organization that works on racial issues in the region, Better Family Life, has long been on the front lines of these issues.  One BFL activist, Etefia Umana, who happens to live only 1,500 feet from where Brown was killed, said that he has been surprised by the “depth of anger” about the killing. In the wake of the police shooting of the unarmed young man, BFL has placed social workers and psychologists near the site to be available for help neighbors deal with the traumatic events.

While we are proud of the leadership role of the NeighborWorks-chartered Better Family Life, we have to suggest that Ferguson shows the signs of an underdeveloped civic environment, in which nonprofit and community groups haven’t build the democratic infrastructure to counter the completely unrepresentative and politically retrograde government that has shown its colors and values in the wake of Mike Brown’s death.  Ferguson is a city that seems to have been deaf to the needs and concerns of the majority of its citizens. It is a city that persists in that deafness by showing up prepared for battleground set pieces against the aggrieved protesters, though fortunately Governor Nixon replaced local and county police with state troopers going foward.  Can you say “leadership”?  Because it has been much there from the president and the governor, it is going to have to emerge from the nonprofit sector.—Rick Cohen