Most Successful Athletic Charity Event in U.S. Rides On 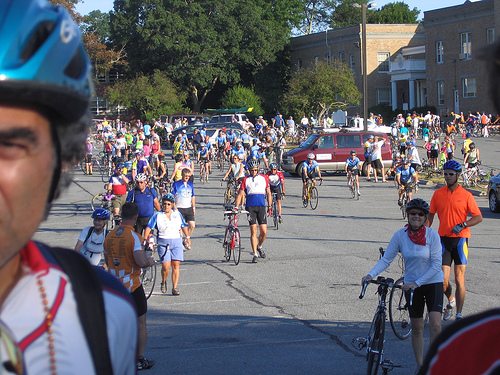 This past weekend, the Pan-Massachusetts Challenge saw thousands of bicyclists crossing the Bay State along a number of routes to raise money for the Dana-Farber Cancer Institute’s Jimmy Fund. After raising $35 million last year, the Boston Globe reports that the event is “the most successful athletic fund-raising event in the country” and that this year’s cyclists will include U.S. Senators John Kerry (D) and Scott Brown (R).

Presented by the Boston Red Sox Foundation and New Balance, the Pan-Mass Challenge, the event is “the nation’s original fundraising bike-a-thon” and it boasts of donating “100% of every rider-raised dollar directly to cancer research and treatment” through the Jimmy Fund. Many of those who ride in the event are cancer survivors themselves, and many others ride in honor of loved ones lost to cancer or those who are currently undergoing cancer treatments. This year marks number 33 for the event, and the fundraising goal was $36 million.

“This group is passionate and committed,” Billy Starr, the organization’s founder and executive director said in a statement. “If any organization can reach this goal, it is the PMC.” Today, the idea of a charity athletic event is quite common, but the idea was not so widespread when Starr and 35 of his friends first rode across Massachusetts in 1980 to raise $10,200 for cancer research. Its growth and success has been impressive to behold. –Mike Keefe-Feldman