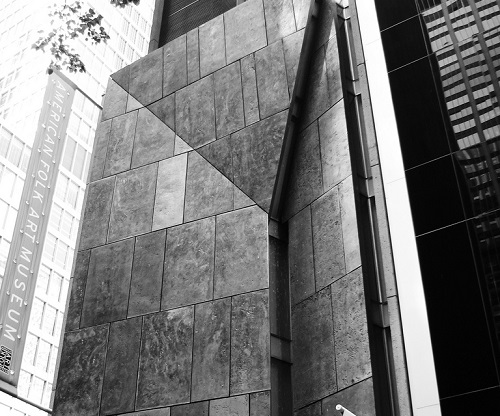 In New York City, right next to the Museum of Modern Art, a building was erected 12 years ago to house the American Folk Art Museum. With a handcrafted copper façade, it was immediately lauded as an icon, and something of a work of art in its own right. But two years ago, the museum moved and sold the building to MoMA to finance an expansion. Now MoMA plans to tear it down, saying that that the opacity of the building does not fit with its own glass design.

Andrew Dolkart of Columbia University’s historic preservation program says that it’s unusual and tragic that a building of such note has become a “disposable artifact.” The architects, Tod Williams and Billie Tsien, are now faced with having one of their more high profile and beloved projects razed. They call their creation “a kind of small building, that’s crafted, that’s particular and thoughtful, at a time when so many buildings are about bigness.”

At NPQ, we are struck with the financial freedom of MoMA (which we love to visit). It is in the middle of a major expansion, and this lot will complete that but does this decision make sense to the art world?—Ruth McCambridge