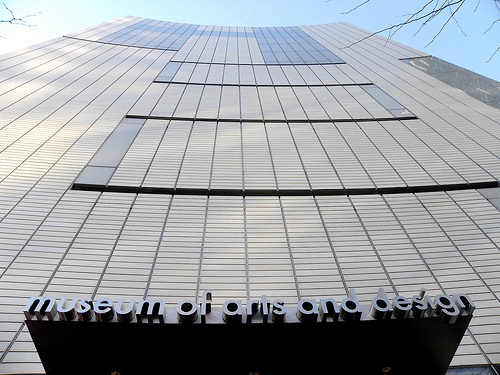 New York’s Museum of Arts & Design (MAD) recently gave prime lobby space to what they termed an “experiment in self-serve curation,” inviting their public to decide what design objects were museum-worthy. Lead curator Anne Quito, to whom “they gave away the power of ‘credentialing’—possibly their most valuable power,” is a student at The School of Visual Arts. She wrote the proposal for the exhibit, and Quito’s classmates, Caterina Francisca and Sandra Nuut, were co-curators.

“We hoped to engage as many ‘critics’ and ‘curators’ as possible,” Quito says, “and challenge the traditional curatorial cycle/hierarchies. The fact that we were given prime lobby space (rather than a studio on the 6th floor) was critical. The fact that it was free and open to the public reinforced the democratic spirit behind the concept.”

The exhibit was arranged as something of a blind “swap meet,” with visitors leaving and taking items. It was staged to be as indistinguishable as possible from a MAD museum exhibit and also had some performance elements. “The three of us who manned the exhibit for the three-day run wore all black, white museum gloves, and tried to act with the decorum of someone who might work for such institution.”

The curators wanted artists and designers and crafts people “who have been waiting to be collected by a museum,” to bring contributions but they also were excited by what else might come. Quito says “I really wished someone would have taken off their bra and left it there.”

The article summarizes some of the stranger entries in the exhibit’s transaction log:

Murray Moss, a well-known design entrepreneur, left a vintage red star pin with a photo of the baby Lenin. Someone left a Chilean satirical newspaper with Barbie on the first page and took the donkey mask. A young boy left a pencil from the MET gift shop in exchange for a paper sculpture by a visiting artist at the MAD Museum. Another visitor swapped a Library card from Maryland for a urine test kit. Then there was a faulty iPod with “Superior Music” exchanged for a broken “10:15:37 cat o’clock” (a broken watch). One visitor wrote in the log: “Entry: I TOOK: ‘a look’ I LEFT: ‘happy.’”

Quito says, “What people left, together with the labels they included with it, spoke volumes…There were many ‘Duchampian’ moments. A sanitary pad becomes ‘design’ or ‘art’ when given a label.”—Ruth McCambridge