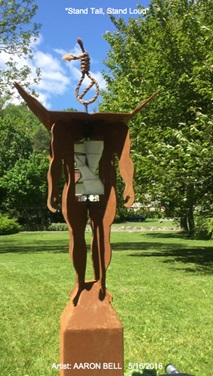 How does an increasingly diverse society share its public spaces and facilities? Is there a way to maximize their public nature while still respecting diversity? Two recent small controversies illustrate how difficult balancing competing interests in space we all share can be. Within this conversation lie considerations about free speech, rights of association, and what it is that makes for a vibrant civil society.

In the first case, Aaron Bell, an African-American artist, was asked to modify a sculpture that was created for a New York City park because its graphic depiction of the horrors of slavery offended other users of the park. The sculpture, entitled “Stand Tall, Stand Proud,” includes imagery of an x’d-out noose, symbolizing that lynching was now illegal. Mr. Bell described the intent of his work in a statement he issued when controversy broke out.

[T]he noose is the embodiment of all forms of hate found in society. Hatred directed towards LGBT communities, religious communities, racial and ethnic communities. Hatred manifested by corrupt members of police departments and corrupt governments as well as hatred manifested by bullies and egocentric politicians. The banned symbol in the center of the noose represents zero tolerance for any and all manifestations of hatred.

But the NYC Park District told Bell that unless the piece was modified and the noose removed, it could not be installed. Their reasoning? According to the Observer, Park District officials felt the piece needed to be altered “because the proposed site for this work is adjacent to an area regularly programmed with passive recreational activities such as yoga, Pilates, and senior movement programming.” Apparently, comfort was the critical variable in this public space.

On Wednesday, June 1st, a New York Times editorial slammed a long-standing practice of the N.Y. Park District that provides women’s-only swim hours in a Brooklyn pool to meet the needs of the neighborhood’s Orthodox Jewish population.

Four times a week this summer…a public swimming pool…in Brooklyn will be temporarily unmoored from the laws of New York City and the Constitution, and commonly held principles of fairness and equal access. The pool will instead answer to the religious convictions of one neighborhood group. […] Orthodox Jewish beliefs demand modesty in dress, and a strict separation of the sexes, and those are the beliefs to which the taxpayer-owned-and-operated Metropolitan Recreation Center will yield.

Leaders of the Orthodox Community oppose any effort to end this practice as imposing on their rights to use public space. Agudath Israel of America’s director of public affairs, Rabbi Avi Shafran, told the Forward that women-only hours were a “reasonable accommodation. Rescinding the special sex-segregated hours would be the equivalent of a sign saying, ‘No people with traditional values allowed.’ The classical concept of modesty that is embraced by many citizens may have its roots in religious systems. But reasonable accommodation of the needs of such New Yorkers is not an endorsement of any religion.”

Resolving these issues should be easy. Allowing everyone to share the commons means that I may have to compromise my individual perspective. Offending my sensitivities should not be a reason a particular artistic expression is banned or modified. Meeting my particular religious needs should not bar someone else from using the commons. When this is not the way we are ready to live together, then “separate but equal” is easy to accept—and we already know how well that plays out for as a nation in the long run.—Martin Levine