NAFTA at 20: A Nonprofit Retrospective 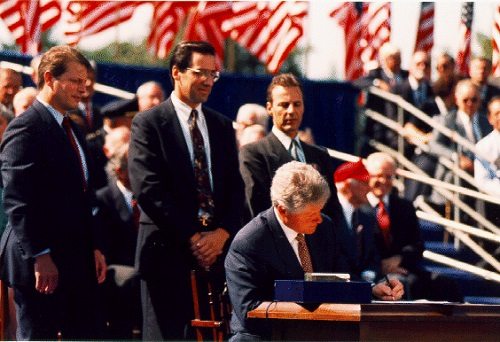 In 1994, the year in which the American public became familiar with the acronym “NAFTA,” David Perdue, a candidate today for the Republican nomination as senator from Georgia, joined Haggar Clothing, the iconic menswear manufacturer. At the time, with Perdue then in charge of international operations (and, later, of domestic operations as well), Haggar began cutting back on employment in its manufacturing facilities in South Texas, shifting operations to plants in Mexico and elsewhere where the average wage was $1.50 an hour. Haggar’s U.S. employment was 4,300 in 1996, but dropped to 2,600 in 1997 (while its overseas workforce was a roughly stable 1,700 both years). In 1998, 1,667 laid-off Haggar employees had been certified for NAFTA retraining because of their having lost their jobs due to outsourcing or foreign imports.

Twenty years ago, the North American Free Trade Agreement went into effect, bringing together Mexico, Canada, and the United States into a trade partnership that has been a topic of controversy ever since H. Ross Perot denounced it as part of the “giant sucking sound” accompanying jobs leaving the U.S.

Some slam NAFTA as a disaster on many fronts, particularly when it comes to jobs. For example, a candidate in the Democratic primary for Ohio’s 6th Congressional District, Greg Howard, recently made his position clear: “We were sold out on the issue of NAFTA,” Howard said. “We were promised 400,000 to 600,000 jobs, but we lost a million. There are a lot of abandoned factories.”

It isn’t clear that the U.S. jobs that have been lost went to Mexico and Canada so much as to China, whose dominance of the global economy wasn’t quite as sharply outlined two decades ago. But the image of NAFTA as a job and environmental loser for the U.S. economy is strong in many circles, including among some nonprofits. For example, an op-ed from a San Diego newspaper, co-authored by a representative of the Sierra Club and a representative of the International Brotherhood of Electrical Workers, used the “devastating effects” of NAFTA to condemn the proposed Trans-Pacific Partnership (TPP) as “another job and environment-destroying trade pact.”

Criticism of the legacy of NAFTA seems to come from all sides of the political spectrum. For example, Gilles Stockton, a Grass Range, Montana rancher who is a member of the Western Organization of Resource Councils, sharply condemned the consequences of NAFTA:

“Instead the United States has lost nearly a million manufacturing jobs; American livestock producers are undermined by a flood of Canadian and Mexican beef; foreign corporations interfere with our democratic process; and industry after industry has adjusted compensation downward, shrinking America’s middle class.”

Nellie Parks, an Oregon farmer and member of Oregon Rural Action, and Mabel Dobb, an Idaho rancher and, like Stockton, a member of the Western Organization of Resource Councils, added, “Since NAFTA, the United States has lost 170,000 family farms and ranches, and rural communities have lost population. Mexican farmers fled the countryside and crossed the border to escape the poverty caused by a flood of cheap American corn.”

NAFTA was a product of the Clinton administration, and the pending TPP has been crafted by the Obama administration, but some Democrats have been critical of both. The TPP “threatens to roll back financial regulations, environmental standards, and U.S. laws that protect the safety of drugs and food and the toys we give to our kids,” said Representative Rosa DeLauro (D-CT). “We should not blindly endorse any more NAFTA-style deals negotiated behind closed doors.”

Nancy L. Wade, a Green Party candidate for an Illinois seat in the House of Representatives, added her NAFTA critique: “It’s time to repeal and renegotiate trade agreements like NAFTA that have imposed poverty on villages throughout Mexico and our other neighbors for the benefit of powerful corporations, especially agribusinesses, that are favored by trade authorities. NAFTA’s passage resulted in a flood of undocumented immigrants beginning in the mid-1990s.”

What’s the conclusion of the story of Haggar and other clothing manufacturers in South Texas? Most of them are already shut, but the dynamic that shut them down seems to have spread south. “The Mexican cut-and-sew operations are all being put out of business by Asia now,” Mayor Connie de la Garza of Harlingen, Texas, said on the closing of one of the last textile manufacturing plants in his city. “You know those famous Mexican shirts for men, the guayaberas? Now they’re made in Taiwan.”

Are nonprofits in general concerned about the impacts of NAFTA and the potential added impacts of the TPP? Or are the issues involved in these free-trade pacts really being overwhelmed by larger issues of globalization? Where are nonprofits on free trade, twenty years after NAFTA?—Rick Cohen