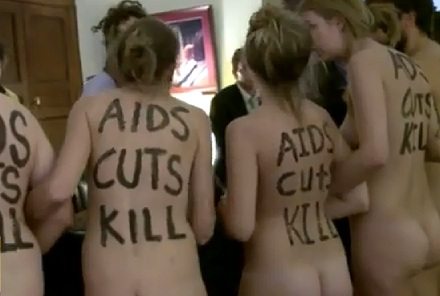 Taking preventive action, a number of AIDS activists stripped down to their birthday suits at the office of U.S. House Speaker John Boehner to protest possible cuts to AIDS programs. On their bodies was the message “AIDS cuts kill.” The occasion of the protest was the coinciding of fiscal cliff talks with the events associated with World Aids Day on Saturday. Among the chants were, “Boehner, Boehner, don’t be a d—, budget cuts will make us sick” and, “The budget cuts are really rude, that’s why we have to be so lewd.”

The protest was organized by Queerocracy, which is described as “a grassroots organization that promotes social and economic justice through direct action, community engagement and education,” along with Health GAP, ACT UP and Vocal New York. A press release stated, “The naked truth is that if President Obama and Congressional leaders like Speaker Boehner allow these budget cuts to lifesaving programs, global health programs will lose $689 million, while domestic AIDS programs will lose $538 million.”

I’m not sure what else to say about this except that three women involved were arrested by Capitol police after they redressed themselves. There were naked guys there, too, but they left before the arrests occurred…and for what looks to us like a relatively small protest, it got some great coverage. I am the NPQ writer on the naked protestor beat, having written about the man in Oregon who stripped down in protest of TSA procedures last year. Send all tips my way. –Ruth McCambridge