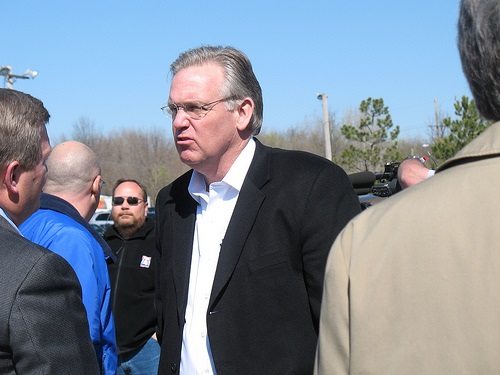 Last week, NPQ published a statement from a group of foundation presidents asking for government bodies to exercise restraint and respect in their treatment of protestors in the wake of a grand jury decision about whether or not to indict a white police officer in the shooting of Michael Brown, a black teenager in Ferguson, Missouri. In recent days, rumors have been circulating that the decision was imminent and that an indictment was unlikely.

The last few days have seen renewed protests in Ferguson and trainings in nonviolent civil disobedience. Now, Missouri Governor Jay Nixon has issued an executive order that activates the National Guard “to support law enforcement during any period of unrest.” The grand jury was convened on August 20th and its decision has appeared imminent since last week.

“As part of our ongoing efforts to plan and be prepared for any contingency, it is necessary to have these resources in place in advance of any announcement of the grand jury’s decision,” Nixon said in a statement. “All people in the St. Louis region deserve to feel safe in their communities and to make their voices heard without fear of violence or intimidation…Public safety demands that we are fully prepared for any contingency, regardless of what the St. Louis County grand jury or the U.S. Department of Justice decides.”

St. Louis mayor Francis Slay says that while the Guard will be activated, St. Louis County law enforcement officials will lead any policing of the protests that are likely to follow if Darren Wilson is not indicted, and that they will only wear their regular uniforms, not riot gear. “The men and women of our police department know our city the best,” said Slay. “These are our police officers. These are their neighborhoods. We feel more comfortable having them deal directly with protesters.”

He added, “We do not want to make this look like this is a militarization of our police department, and we want to make sure people know that these cops are just there to keep peace and they’re not there to clash with protesters.”

The priorities, said Slay, are to “do everything we can” to keep people and property safe as well as protect the First Amendment rights of protesters.

Meanwhile, gun sales are up significantly according to Steve King of Metro Shooting Supplies, who said the store sold 225-250 guns last weekend, compared to more the typical 30-40 guns.—Ruth McCambridge