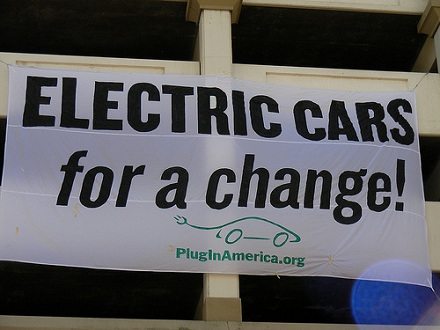 Unless you happen to have a vibrant community of electric car enthusiasts in your area, you may not have known it, but this past Sunday was National Plug-In Day. The event, organized by a coalition of nonprofits—Plug In America, the Sierra Club, and the Electric Auto Association—sought to draw “global attention to the environmental, economic and other benefits of plug-in electric vehicles through simultaneous events staged around the country.”

In Santa Cruz, Calif., the electric vehicles on hand included the Nissan Leaf, Ford Focus, and Tesla Roadster, as well as a just-released 2013 Toyota Rav and a soon-to-be-available BMW Active E sedan. Partially electric or hybrid cars such as the Toyota Prius and Chevy Volt were also on display. Electric Auto Association President Beverly DesChaux noted that “Plug In Day marks a significant milestone in the evolution of EVs…from when Electric Vehicle Association members were tinkering in garages over 40 years ago, converting gas cars to electric, to now when most major manufacturers sell or will soon sell their electric vehicle—and the biggest winner is the environment.”

In Huntsville, Ala., Tennessee Valley EV Drivers founder Joshua Pritt and others gathered at the Redstone Energy Demonstration Park. Pritt noted that his hybrid Chevy Volt allows him to drive approximately 3,000 miles with only seven gallons of gas. Huntsville Mayor Tommy Battle, who drives an electric-powered 2012 Ford Focus, was also on hand for the gathering.

In Vermont, Gov. Peter Shumlin declared this past weekend Vermont Plug-In Weekend. The statewide group Drive Electric Vermont offered opportunities to learn about and test-drive electric vehicles at car dealerships across the state. Vermont’s Times-Argus reports that “[t]hese vehicles can plug into any conventional electric outlet. They are also increasingly affordable to purchase and operate: Driving an electric vehicle costs 2-4 cents per mile, while a gas-fueled vehicle costs 10-15 cents per mile.”

More than 60 cities reportedly participated in National Plug In Day, but outside of some local media reports, the event doesn’t appear to have made a large splash on the national radar screen. Electric vehicles offer both economic and environmental benefits, but environmental concerns about carbon dioxide emissions and climate change have been “totally missing” in the campaign trail debate between President Barack Obama and former Massachusetts Gov. Mitt Romney, according to MIT economist Henry Jacoby. Jacoby argues—and we agree—that such discussions should return to prominence since “we’re running a serious risk of passing a much-damaged planet to our descendants.” –Mike Keefe-Feldman