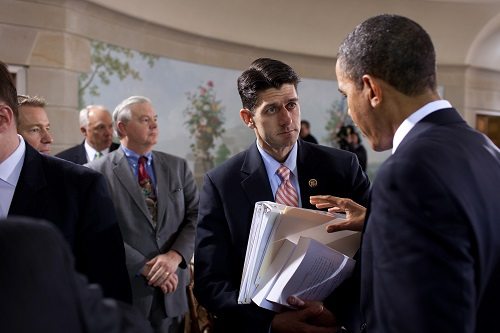 We’re shocked, shocked, that there’s politics in Washington, D.C.! Remember last week when, despite the opposition of some Tea Party-ish Republican members of the House, the Republican House leadership banded together to support the compromise budget deal worked out between House Budget Committee chair Paul Ryan (R-WI) and Senate Budget Committee chair Patty Murray (D-WA)? A procedural hurdle in the Senate was overcome yesterday, with the likelihood that this mini-budget will be passed, albeit with more than a dollop of political posturing by some Republican senators. Assuming that the budget deal officially passes this week, there might be a process that hasn’t happened in Congress for quite a while—appropriations, which is critically important to nonprofits.

The Republican leadership in the Senate wasn’t feeling quite as bipartisan as their House counterparts regarding the budget deal. The Senate voted 67 to 33 to move forward on a vote later this week on the budget deal, with the unanimous support of Senate Democrats and the positive votes of only 12 Republicans. (The majority of Republican senators voted “no.”)

To some extent, since the Democrats hold the majority in the Senate, the Dems could pass the budget deal even if all 45 Republicans voted against, whereas Ryan couldn’t have gotten his deal through the House without Democratic support. Nonetheless, voting against even proceeding to a vote on the substance of the budget deal were top Republican senators such as Minority Leader Mitch McConnell (KY) and Minority Whip John Cornyn (TX).

Both McConnell and Cornyn face primary challenges in their 2014 reelection efforts. They were joined in the “no” column by four other Republican senators likely to be primaried: Thad Cochran (MS), Mike Enzi (WY), Lindsey Graham (SC), and Pat Roberts (KS). The only Republican senator to vote in favor of this procedural move, Lamar Alexander (TN), also likely to face a primary challenge in 2014, said he would nonetheless vote against the budget deal itself. Go figure.

Polls show that only a minority of Republicans across the nation (39 percent) support the Ryan-Murray budget deal, but Democrats have much in the deal—or not in the deal—to lament. Last week, Iowa’s Tom Harkin told Radio Iowa that it is “really unconscionable” that “there’s over a million people now who cannot find a job, out of work, and right at this time of year their unemployment insurance is being cut off,” a benefit that some Democrats believe should have been included in the budget deal.

Nonprofit lobbyists are undoubtedly aware that the next big fight starts as soon as the budget deal is OK’d by the Senate and signed by President Obama, probably later this week. It is the appropriations process. The budget deal sets “top-line” budget numbers, but then the House and Senate appropriations committees have to pass as many as 12 bills (or a 12-bill omnibus package) that delivers money to the various federal departments and programs. Remember, since they’ve depended on continuing resolutions recently, the House and Senate haven’t come together on appropriations in quite some time, with the House passing only five appropriations bills, and the Senate none, in 2013. Appropriations chairs Barbara Mikulski (D-MD) in the Senate and Hal Rogers (R-KY) in the House will probably see no particular problems with passing appropriations bills for Defense and Homeland Security, areas where both parties somehow have few or no conflicts, but appropriations for domestic concerns, particularly Labor (involving jobs) and Health and Human Services (likely to touch on the implementation of the Affordable Care Act) will be much more contentious.

Remember the days of powerful appropriations committees, when the House Appropriations Committee was chaired by the likes of Joe Cannon (R-IL), who went on to become Speaker, or when the Senate Appropriations Committee was chaired by Carl Hayden (D-AZ) for 14 years and—four times between 1989 and 2009—by Robert Byrd (D-WV)? With a likely omnibus package of 12 bills on their plates, Mikulski and Rogers will have a busy holiday season. If nonprofits care about the numbers below the top-line budget categories, they should be active these next few weeks too.

Here’s a guess as to what might—or should—motivate nonprofits in the appropriations process:

Unless the Senate implodes, the budget deal will pass and the appropriations process will commence. Time for nonprofits to get into the fine print of agency budgets and make sure critical safety net programs are protected and expanded.—Rick Cohen