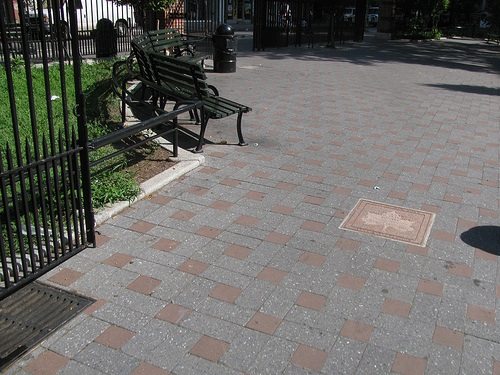 Hanging out with nonprofits must count in local elections. In New York’s Soho neighborhood, community activists protested the city’s decision to locate a Citi Bike docking station on a corner of Petrosino Square that had been long used for public art displays sponsored by the Lower Manhattan Cultural Council and by the Parks Department. The community group, Friends of Petrosino Square, succeeded in getting the city to rethink its decision.

What interested us, however, was the photograph accompanying the article, in which the Friends stood behind the bike rack, holding letters spelling “Petrosino Park.” One of the letter holders was a candidate for New York City Council, Jenifer Rajkumar. We had seen news about Rajkumar’s association with nonprofits before and decided to check.

Rajkumar is identified as the founder/CEO of W-Spin, a nonprofit whose mission is, according to its website, “to help more young women enter leadership positions in legislatures around the world.” It claims three programs: the Heroine Education Research Project, to “research, uncover, and teach the story of forgotten heroines all over the world, educating young women from Abu Dhabi to Cairo on this history”; the Leadership as Love Project, to “educate 9 to 2 year old girls all over the world on political leadership”; and It’s Our Time, “to create an enduring global network to propel women into leadership in the world’s legislatures.”

It is a hefty, ambitious agenda for any nonprofit, but W-Spin isn’t yet accepting contributions or donations, as its 501(c)(3) status is still pending. The entirety of the programs so far, since the organization’s founding in late 2011 (though there is a story about W-Spin’s launch from October of 2010, and it registered with the state that same year, according to the New York Post), seems to be some short write-ups—three, to be exact—of women legislators from Afghanistan and Malaysia, all dated May 28, as part of the Heroine Education Research Project.

Rajkumar gave her experience with W-Spin some visibility in her campaign bio, but she admitted to the New York Post last month that W-Spin “has yet to get off the ground. It has no staff and no budget,” although the website lists five employees (who may be volunteers) in charge of Middle East outreach, communications, and media, for example. After the questioning by the New York Post, Rajkumar’s campaign website deleted references to W-Spin.

It’s kind of hot to be associated with nonprofits now, which is something of a reversal from the negative image of nonprofits that existed after scandals such as those with the United Way and Red Cross some years ago. But it’s also easy to create a nonprofit, articulate a mission, gin up a website, and claim programs. People interested in political candidates with nonprofit experience might want to check exactly how deep and how real that experience might be.—Rick Cohen