In today’s world, technology or the lack thereof—and nothing’s a greater drain on resources—can often hold a nonprofit back. For many, if not most, nonprofits, service takes priority over technology. As much as an updated website or a better data system might help in expansion and documentation of services, the costs, both monetary and human, are too great. NPQ has covered this topic before and identified some important resources, such as TechSoup, which provides discounted software to nonprofits. Now, for nonprofits in Minneapolis, Kansas City, Chicago, and Phoenix, the Nerdery Foundation provides a new resource that may offer additional options and solutions to nonprofits.

NPQ covered the story of the Nerdery Foundation’s 24-hour website challenge in March 2017. Since 2008, the nonprofit has brought technology nerds seeking a means to give back to the community and nonprofits in need of websites together.

The Overnight Website Challenge matched programmers willing to donate their skills and their time for a cause with select nonprofits that applied for the chance to have their websites created, merged, or updated. Volunteers from the tech community formed teams of web pros; when they show up, they don’t know which nonprofit they’ll serve, pro bono, for the next 24 hours.

Success often breeds growth, and the Nerdery Foundation is no exception. The foundation now reports that its Overnight Website Challenge has engaged over 1,300 web professionals in 18 events since 2008, who have worked with 209 nonprofits.

“We know there are more nonprofit needs to serve, and more technologists ready to engage,” said Ginger Sorvari Bucklin, executive director at the Nerdery Foundation. “We’ve always known that not every potential nonprofit or project is a good fit for our time-boxed 24-hour, geo-specific event—some jobs were too small, some too big or outside of statewide eligibility per event. None of these barriers matter to Nerdkind.”

The concept sounds simple: Self-described geeks and technology experts are encouraged to sign up and create a profile that includes their skill areas as well as what kinds of causes they’re most interested in serving. Nonprofits can join and list their organizations’ technology needs.

If the work and reach of the 24-hour website challenge is an indicator, there is a broad spectrum of need among nonprofits, and technologists will have many options for their services. This chart shows the range of nonprofits that participated in the website challenge. 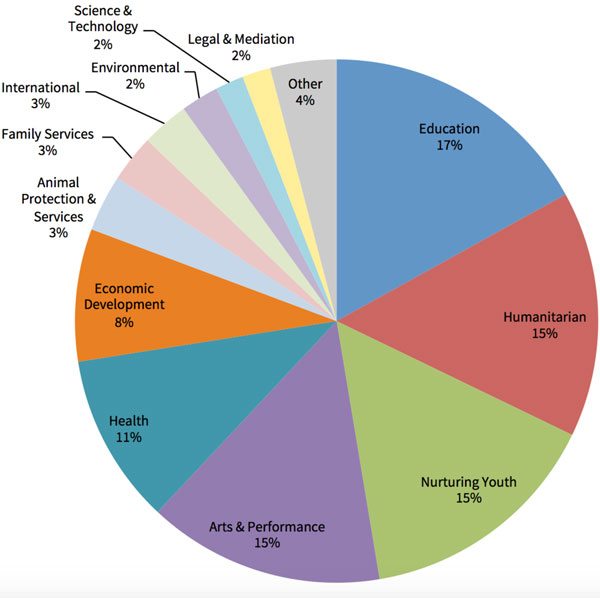 The beta launch, according to a press release, is limited to the Minneapolis area, home base of the Nerdery Foundation. But if the growth of this concept follows the foundation’s earlier successes, and given the virtual nature of the process, there are few limits to where this can go. As R.J. Nicolosi, President at The Nerdery said, “NerdKind is for all technologists—same as our Overnight Website Challenge. Nerds everywhere can contribute to NerdKind.”

As matches go, the one between nerds and nonprofits may just be made in heaven.—Carole Levine