June 22, 2011; Source: Congressional Budget Office (PDF) | The new Congressional Budget Office report on the nation’s long term debt has provoked lots of spin from the left and right cable TV shows and would have gotten more hadn’t President Obama stolen the limelight by announcing a modest withdrawal of troops (but not non-governmental private contractors) from Afghanistan. Since NPQ Newswire readers from across the ideological spectrum have debated on our website issues of governmental spending, taxation, and debt as they affect nonprofits, the CBO findings should provoke more debate. Here’s what the CBO said:

The CBO predicts the following consequences from higher debt levels:

What do NPQ Newswire readers think? Is the debt crisis taking us toward a future like Greece or Ireland, or is it an overblown policy canard that could be reduced mightily, as this graphic from the Center for Budget and Policy Priorities suggests, by ending this nation’s long-running wars in Afghanistan and Iraq and by undoing the Bush/Obama tax cuts? 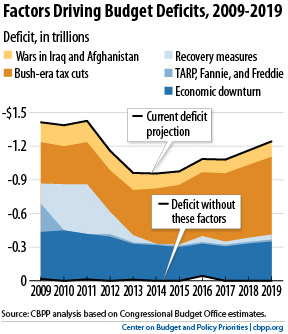