New Legislation to Help Unemployed Vets Should Not Forget Women

June 1, 2011; Source: PoliticsPA | The recent Bureau of Labor Statistics figures on unemployed veterans have prompted Pennsylvania Senator Bob Casey to propose the Transition Assistance Program Audit Act to help veterans find jobs by providing assistance to veterans during their transition period from military service to civilian life. Essentially, the bill would call for a third party audit of the existing program in the Department of Labor — DoL-VETS (Veterans Employment and Training Service) — to make sure that its resources “are up to date and can offer veterans more employment opportunities.”

There are a number of programs for nonprofits to help veterans with employment and job services, including grants and assistance through the National Veterans Technical Assistance Center. Casey also introduced a bill in May called the Hiring Heroes Act that would provide veterans jobs.

NPQ’s previous Newswire about unemployed veterans emphasized unemployed male veterans, but women have been an increasing proportion of the military for some time and face job challenges too. The following chart shows that among veterans who have served since 9/11, the so-called Gulf War-era II, unemployment among women veterans is higher than for men, 12 percent to 11.4 percent. 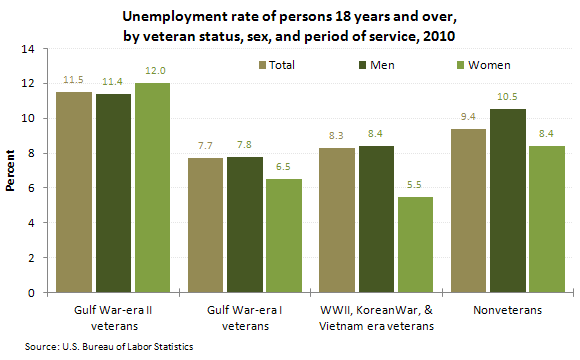 Gender divide in veteran unemployment chart, from the U.S. Bureau of Labor Statistics

These figures are far different than the much lower unemployment rates for women veterans compared to men from the Gulf War-era I, Vietnam, Korean, and World War II eras. Compared to female nonveterans, female veterans from each war era show higher rates of unemployment, especially for young women veterans (though the data for young women 18 to 24 is based on a smaller sample than the other age cohorts and therefore has a larger standard error). 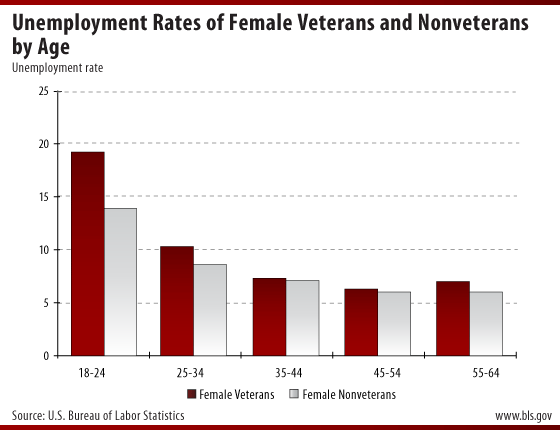 Nonprofits participating in Casey’s legislation – should the bills pass – should remember that women veterans are having a tougher time making the transition to the civilian labor force than their male veteran counterparts, although both need help in this continuing bad economy.—Rick Cohen