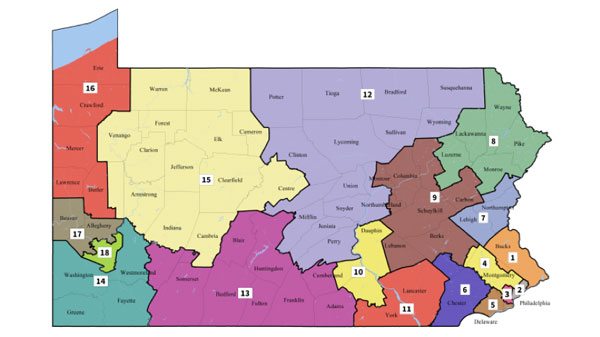 This week, as the Pennsylvania Supreme Court said it would do if the legislature failed to submit a map by February 15th, the Supreme Court mandated a new map for congressional elections. Last month, the Court ruled that the state’s previous congressional district map “clearly, plainly, and palpably” violated the state constitution and ruled in favor of the plaintiffs. That map, drawn by what was at the time a state government led by a Republican governor and a Republican state legislature, was widely seen to favor the Republican Party.

In particular, Rachel Dovey in Next City points out that the map “stands to benefit Pennsylvania’s smaller urban areas.” Many cities, like the post-industrial Reading, notes Dovey, were previously packed into districts in which rural voters overwhelmed the city vote.

As for the partisan impact, according to Aaron Bycoffe, writing for FiveThirtyEight.com, the new map, while more favorable to Democrats than the old map, stops short of committing the reverse offense of being a “Democratic gerrymander.” Even though Democratic and Republican voters are evenly split in the state, a hypothetical model of a “normal election” shows the Democrats’ expected win total being 7.5 seats out of 18, the result in part of Democratic voters being concentrated in the state’s two largest cities of Philadelphia and Pittsburgh.

The new map has five seats that we would categorize as “usually Democratic” over the long term, compared with four under the current map. These are districts where Democrats have better than about a 5-in-6 chance…. Democrats would still be heavily favored to hold four of those new districts—the 2nd, 3rd, 5th and 18th—even in an extremely GOP-friendly national environment. The other one—the 4th—could be at risk in a Republican wave. Eight seats, meanwhile—the 9th through 16th districts—are, to varying degrees, “usually Republican.” The other five districts—the 1st, 6th, 7th and 8th districts and, and to a lesser extent, the 17th—all look highly competitive.

The Court, in drawing its map, were advised by Nathaniel Persily, a Stanford constitutional law professor. Persily, Dovey notes, has in the past assisted judges with other redistricting cases in New York, Connecticut, North Carolina, Georgia, and Maryland.

Last month, when the Pittsburgh Community Foundation filed its precedent-setting amicus brief with the state supreme court, its CEO, Maxwell King, noted that the foundation felt compelled to intervene because of its “concern about the strength of the civic fabric.”

King added that, “More and more voters feel as if they don’t matter, they don’t have a role.” Now, because of the state supreme court ruling and the creation of more compact and competitive districts, a growing number of Pennsylvanians, particularly in the state’s smaller cities, will find that their votes could have much more impact on electoral outcomes than before.—Steve Dubb