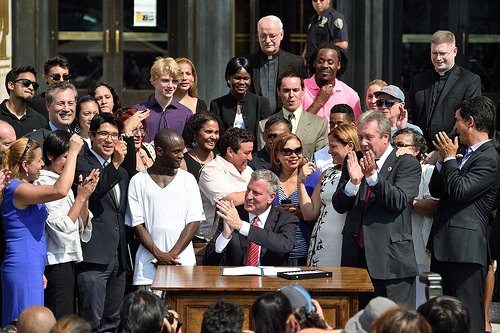 Earlier this week, crowds of hundreds gathered to sign up for New York City’s municipal ID card program at enrollment centers across the city. The largest of its kind in the county, the city’s ID program will be open to anyone residing in New York over the age of 13 who is able to prove identity and city residency. Allowable documents for this process include passports, driver’s licenses, birth certificates, and other documents from the United States or other countries. Unless otherwise arranged, applicants will receive their new IDNYC identification cards from the administration through the mail.

Mayor Bill de Blasio said, speaking of the program, that “for New Yorkers who couldn’t have an official ID, this card is the key to a fuller life.” Such is especially true for the city’s undocumented immigrants, who without proper identification have trouble with many aspects of everyday life. Obtaining prescriptions, renting apartments and compiling with police officer requests all prove extremely difficult without a means of legally verifying identity. Mr. de Blasio also sought to ensure undocumented immigrants that “no one will be asked their immigration status in applying…for an ID because it’s not pertinent. If you’re a New Yorker, that’s all we care about.” The identification will not, however, provide access to federal, state, or city benefits and will not qualify as a work authorization permit.

In a city where half of residents over 16 years of age do not have a driver’s license, the IDNYC card will help other groups as well, particularly homeless individuals and others who have difficulty receiving access to various services due to lack of a fixed address. Opportunities to pick up IDNYC cards from administration-specified locations will be afforded to such individuals.

In order to entice individuals to join the program, no enrollment fees will be charged in 2015, though this may change in subsequent years. Additionally, individuals with an IDNYC card will receive prescription drug discounts, access to city buildings, and the opportunity to open financial accounts at participating banks and credit unions.

Opportunities will also be available for cardholders to obtain access to social, educational, and cultural services. Within the first year, IDNYC cardholding individuals will receive free memberships to zoos and museums within the city and access to the city’s three public library systems. The library systems alone will provide valuable resources to individuals—computer and Internet access, career services, learning materials, financial guidance, and more. Such library services are highly regarded by the public as important to community development and are essential to those with fewer personal resources at their disposal.

In providing individuals with a recognized proof of identity, the IDNYC card will also give nonprofits in New York City the ability to provide service to many more individuals, greatly increasing the sector’s impact in one of the country’s largest metropolitan areas.

As a city with millions of people, New York is a relatively easy place for people to become invisible, especially without a means of identification. An IDNYC will help to curb that invisibility for all of the city’s residents. As said by New York City Council Member Carlos Menchaca, “The launch of IDNYC marks the beginning of a new time in our great City. The significance of the IDNYC, however, is far larger than the creation of another form of identification. The real victory of this program is the way that it will make the lived experiences of New Yorkers—from all walks of life—more full and dignified.”—Michele Bittner

More about: Human ServicesImmigrationPolicies and Laws