News Flash: The U.S. Army Isn’t Going to Invade and Take Over Texas 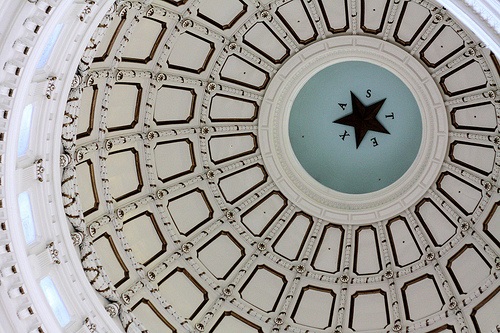 The first we heard about the Jade Helm conspiracy theories was the charge from actor Chuck Norris that the United States military was possibly going to invade and take over Texas. Right wing bloggers have gone almost berserk with scenarios of the military confiscating firearms and relocating residents to internment camps. Although Jade Helm 15 is a military training exercise for troops in seven states, most of them deep red in politics (Arizona, Florida, Louisiana, Mississippi, Utah, and New Mexico in addition to Texas), Texas has captured the lion’s share of paranoid attention, especially with Governor Gregg Abbott’s written directive to the head of the Texas National Guard to closely monitor Jade Helm in order to “protect Texas.”

“During the training operation, it is important that Texans know their safety, constitutional rights, private property rights and civil liberties will not be infringed,” Abbott wrote, though his predecessor in Austin, Rick Perry, quickly denounced Abbott as having gone off the deep end in suspicions about the military exercises.

You can’t really fault Chuck Norris and Gregg Abbott when the junior senator from Texas, Ted Cruz, added to the hysteria: “I understand the reason for concern and uncertainty,” Cruz said. “Because when the federal government has not demonstrated itself to be trustworthy in this administration, the natural consequence is that many citizens don’t trust what it is saying.”

The fact that Chuck Norris believes that Obama might invade the state with probably the largest number of military veterans in the U.S., or that Greg Abbott and Ted Cruz would feed into that belief, is not surprising. Conspiracy theories have a long history in the U.S. even though it is hard to imagine that the powers that be could hold a secret long enough to make a complicated conspiracy like the imagined Jade Helm actually work. More interesting to us is the role of nonprofits and other voluntary groups in generating, promoting, and breathing life into the fears of the likes of Chuck Norris.

For example, Oath Keepers, the right-wing paramilitary group that we last encountered defending police attacks against black men in Ferguson, issued a statement signed by the group’s pseudonymous editor, “Elias Alias,” lengthily describing the role of Jade Helm in testing military approaches to “unconventional warfare,” presumably to deal with impending civil strife in the U.S. homeland, and “Mindwar,” which Alias says is “targeting the mass-mind of mankind.” Alias promises a follow-up statement from Oath Keepers’ founder Stewart Rhodes that will tell followers what they should do in response to the seven-state military exercises.

The Republic Broadcasting Network ran a blog post by one James Fetzer charging that Jade Helm involves “occupying sovereign territory with a nation’s own armies” and is “in complete violation of not just the Posse Comitatus Act of 1878…[and] is a total affront on every civil liberty the U.S. Constitution and the Bill of Rights is supposed to espouse and maintain.”

While the last images most people saw concerning the Oath Keepers were of a St. Louis County police officer whose Oath Keepers commentary got him busted and dismissed, there are right wing groups that, while extreme to many people, have enough standing to get people nominated and elected to Congress—and to buy into the Jade Helm conspiracy theories. For example, the Tea Party News Network reported that a Texas Ranger saw train cars “outfitted with prison-type shackles…moving about Texas.” Tea Party Nation gave space to a report that Texas Republican Congressman Rep. Louis Gohmert had expressed concern about Jade Helm due to increasing numbers of calls received by his office, worth quoting at a little length:

“This military practice has some concerned that the U.S. Army is preparing for modern-day martial law,” Gohmert said. “Certainly, I can understand these concerns. When leaders within the current administration believe that major threats to the country include those who support the Constitution, are military veterans, or even ‘cling to guns or religion,’ patriotic Americans have reason to be concerned…We have seen people working in this administration use their government positions to persecute people with conservative beliefs in God, country, and notions such as honor and self-reliance. Because of the contempt and antipathy for the true patriots or even Christian saints persecuted for their Christian beliefs, it is no surprise that those who have experienced or noticed such persecution are legitimately suspicious.”

“Once I observed the map depicting ‘hostile,’ ‘permissive,’ and ‘uncertain’ states and locations, I was rather appalled that the hostile areas amazingly have a Republican majority, ‘cling to their guns and religion,’ and believe in the sanctity of the United States Constitution,” Gohmert added. “When the federal government begins, even in practice, games or exercises, to consider any U.S. city or state in ‘hostile’ control and trying to retake it, the message becomes extremely calloused and suspicious.”

For Tea Partiers, and for Tea Party-aligned elected officials such as Gohmert, the willingness of Governor Gregg Abbott to instruct the National Guard to keep a close eye on U.S. military exercises makes Abbott look like their civil rights leader. However, overblown fears of both the right and left are easy to bring to the surface. For the right, it’s virtually anything that can be linked, no matter how tenuously, to President Obama. For the left, as Justin Peters wrote in Slate recently, citing the work of his colleague Dahlia Lithwick, the fears are “of a militarized police state [and] anxiety over lawless authorities,” as though the majority of police have itchy trigger fingers ready to gun down unarmed black men.

Life is usually too complex and messy for conspiracy theories wrapped neatly in boxes. In Baltimore, Ferguson, Cleveland and elsewhere, hopefully it will be the Justice Department and local authorities sorting through the steps necessary to ensure that the policies and practices that make shoot-first police possible or allow officers to let an injured prisoner die in their custody are eradicated. That seems to be the tack that advocates and protesters are taking toward fixing the police practices that have led to dead black men in Ferguson, Staten Island, Charleston, and Baltimore.

But to think there are legislators and governors suspicious that the U.S. military will invade Texas, you have to wonder about them and the nonprofits that back them.—Rick Cohen