Newseum, Like Many Museums, Unable to Move Beyond the Economic Crisis 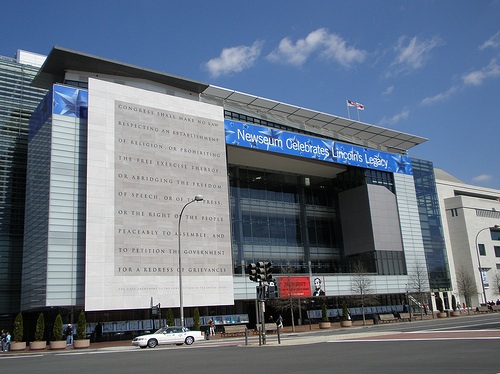 Five years ago, the nonprofit sector, along with the rest of the country, was entering the toughest economic era since the Great Depression. While much of the country is starting to feel the seedlings of resurgence, American museums are still suffering tremendously. In a report issued by the American Alliance of Museums entitled America’s Museums Reflect Slow Economic Recovery, 2012 saw more than 67% of museums reporting economic stress at their institutions “ranging from moderate (44%) to severe (15%) to very severe (9%)—with very severe stress defined as ‘the very worst I have seen in at least 5 years.’”

While two-thirds of American museums are feeling the crunch, some who had taken on big projects may now be paying the price. The most noticeable of these museums is the Newseum, the high-profile Washington, D.C. museum that has been exhibiting not just historical artifacts, but also severe staff cuts and drastic borrowing from their endowment. According to an article in the Daily Republic, “in the five years since moving to its new home overlooking the U.S. Capitol, the Newseum has become a major attraction with 4 million people visiting its exhibits about journalism and the First Amendment. Yet it’s been struggling mightily to cover its costs.”

According to the Associated Press, financial documents show revenue fell short of expenses by millions of dollars in 2009, 2010 and 2011. To help meet the gap, the Newseum’s endowment declined from $600 million to about $373 million at the end of 2011, while also imposing ongoing staff layoffs—four rounds since 2008, with the most recent in January.

Similarly, other museums are suffering the same challenges as the Newseum. A case in point is a museum on the other side of the country in Marin County, California. According to the Marin Independent Journal, the Marin History Museum “has been operating with a deficit for at least five years, faces serious financial challenges when it comes to staying open, and officials have not released detailed accounts of how money on failed projects has been spent.” While in Marin the issue might stem from an ill-conceived recent $4.7 million rock exhibit, at the Newseum, over-reliance on its endowment is not the only concern.

Like the museum in Marin, the Newseum is hesitant to reveal its most recent financials, failing to “provide any updated financial details from 2012” upon a recent Daily Republic inquiry. In Marin, the museum’s board president, Jean Zerrudo, stated the “museum is only required to publish its tax returns and that revealing more in-depth financial statements could make some donors uncomfortable.” Unlike the Marin museum, there is worry that, in its financial pinch, the Newseum is exhibiting Wall-Street-like behavior in having excessive executive pay. Current Newseum CEO James Duff, hired in 2011, is paid $1.6 million, including $133,000 in salary, a $50,000 bonus and $1.4 million in deferred compensation for retirement. The most recent chairman, Charles Overby, was paid $632,193 in his final year, including $390,000 in base salary, $129,000 in other compensation and $92,000 for retirement and other benefits. In recent years, the Newseum cut employee retirement contributions to reduce costs, while at the same time offering similar and generous benefits to its CEOs.

Another report issued by the American Alliance of Museums, entitled Trendswatch 2013: Back to the Future, suggested that museums should “come together as a field to deliver a unified message about the social good provided by museums.” Expressing this message may become harder due to the very public challenges and missteps made by the Newseum and some of their museum peers.—John Brothers