More than a hundred CEOs of NGOs from across the nation are promising to improve how they address and prevent sexual abuse and harassment by and among their staff. Their public pledge was signed last week by members of InterAction, an alliance of 185 American NGOs working to combat poverty across the globe.

At the time of publication, 118 signatories said they will commit to establishing “working environments free from sexual abuse, exploitation, and harassment by and of NGO staff within our organizations and the countries in which we operate.”

This public display of unity follows a slew of sex scandals that have shaken the international aid sector in recent months. Just last week, a UN employee told CNN she was sexually assaulted by UN assistant secretary general Dr. Luiz Loures and says the UN did not take her complaint seriously. (Loures reportedly denies the charges.) In February, a Times of London investigation found that Oxfam workers were paying for sex in Haiti. And NPQ’s own recent investigation uncovered concerning levels of sexual abuse and harassment among aid workers by their colleagues.

“Collective action is how we will make real change happen,” says Abby Maxman, president of Oxfam America and co-lead of InterAction’s CEO Task Team on Sexual Harassment and Abuse. “Power relations, preventing sexual exploitation and abuse of the people we serve—and in the sector—has been a longstanding issue,” she says in explaining how the pledge came to fruition.

There is insufficient data about levels of sexual abuse and harassment in the humanitarian sector, but it is likely underreported. Survivors frequently fear retaliation, losing their jobs, or that they will not be believed by their supervisors. Reporting assaults is further complicated by the fact that many aid workers are located in regions plagued by conflict, crisis, or political instability, which makes reporting incidents to local authorities problematic and precarious. Exactly how the signatories of this pledge will go about fostering environments that are conducive to reporting across the globe remains an open question.

Interviews with several veteran aid workers, all of whom have survived sexual assaults on the job, and all of whom endured negative, even painful, responses from their organizations in the wake of the attacks, reveal that the sector has much work to do if it is going to make harassment and abuse reporting easier, more transparent, and more supportive of survivors themselves.

Aid worker Michelle Tolson has worked in conflict countries for UN agencies, NGOs, and international organizations. After she was assaulted by a participant at an event, she was offered one day of sick leave and received no follow-up to her requests for in-person psychosocial support. “I worried I would lose my job if I pursued that request. Everything I asked for, I felt I had to fight for,” she said in an email. In terms of the InterAction pledge, Tolson says, “Reporting and prevention is important, but creating standard operating procedures for survivors that are industrywide is key and seems to be missing.”

Other aid workers view the pledge more favorably. Anika, who wanted to use only her first name, has been a humanitarian aid worker for more than 20 years and is a co-founder of the Humanitarian Women’s Network, which surveyed more than 1,000 female aid workers about their experiences with discrimination, sexual harassment, and abuse. Anika says she was involved in drafting the pledge and sees it is a meaningful step forward. “This is very inspiring. The pledge sets the tone from the top leadership of 116 extremely diverse agencies. That is something that could actually start changing things for us in the field.”

Making that happen—turning the pledge into meaningful, measurable change for aid workers in the field—may indeed be the only outcome that matters in the end. Figuring out how to track that progress, quantify it, and hold CEOs accountable to their public promises…these are thorny challenges the pledge doesn’t explicitly address. But that is to be expected in a document that must be sufficiently broad and elastic to win the signatures of more than 100 organizations.

Proponents of the pledge acknowledge that the wording is a mere starting point; the blast of a starting gun on a marathon journey for the sector as a whole, and for individual CEOs, as they begin to chart their own paths forward.

Maxman says myriad players in the sector’s ecosystem will need to step up to support them. “The donors, the UN, governments, the private sector, everybody has an obligation to engage; to create the enabling environment—and the expectations—to create a safe environment everywhere.”

One way that organizations will know they have created safe environments for their staff is when survivors begin to come forward. “They actually have to believe that something is going to be done or that someone is going to be held accountable,” says attorney Lisalyn Jacobs, who has worked extensively on issues of criminal and racial justice, including sexual violence, and is CEO of Just Solutions. “If (victims) are working at one of these organizations, which has a dreadful track record for addressing these issues, who is going to want to be the first to proverbially walk the plank?” she asks.

“There is also daylight between signing a nice hortatory public pledge and actually having a policy that your organization creates and implements and trains people on, and then actually backs up with action,” she adds.

The pledge does indeed urge its signatories to commit to strengthening policies, procedures, and transparency around incidents of sexual abuse and harassment, “no matter where they occur or the personnel involved. This includes examining and strengthening ways to empower staff and the communities in which we work to report all incidents without fear of reprisal or punishment.”

Maxman and the other signatories are certainly aware that the spotlight is now shining on them. “This was that moment of putting us in the glass house,” she says. “Everyone can see what we’ve committed to, and so we must honor those commitments at a minimum.”

In June, InterAction will hold its annual Forum in Washington DC, which is expected to bring in 1,000 participants “including leadership from marquee foundations, governments, global industries, the UN, and national civil society organizations.” However, at the time of publication, there were no panels on the agenda about sexual harassment and abuse specifically. When asked about this, InterAction said it would have a session on it for InterAction member CEOs, but that session will not be open to the rest of the Forum’s attendees. InterAction says it also plans to have “a few sessions that will address these issues,” but no details were available at the time of publication. 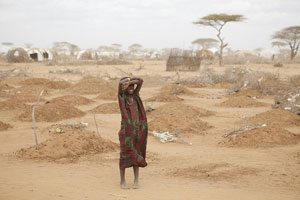