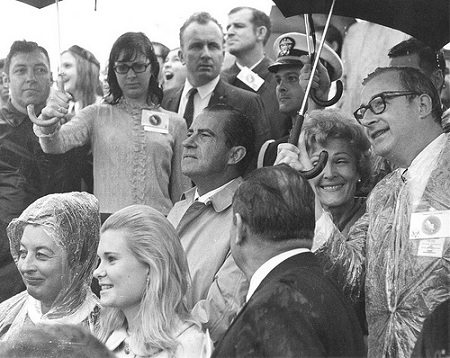 The Nixon Foundation held a gala at the Mayflower Renaissance Hotel yesterday to commemorate what would have been the late president’s 100th birthday. Chairing yesterday’s gala was Nixon administration Secretary of State Henry Kissinger. Aside from Kissinger, the list of scheduled speakers included actor and former Nixon speechwriter Ben Stein (“Buehler? Buehler?”), Nixon’s deputy director of the Office of Management and Budget, Fred Malek, and the inimitable Pat Buchanan, the Nixon advisor who went on to become an unsuccessful presidential candidate. Buchanan was fired from his role as an MSNBC political commentator last year after releasing a book that many considered “homophobic, anti-Semitic and racist.” According to the Nixon Foundation website, the gala—with its $15,000 or $2,500 tables and $195 individual tickets—was sold out.

Politico columnist Roger Simon doesn’t find much to celebrate in the Nixon Foundation’s party. He notes that the commemoration includes “Legacy Forums” discussing Nixon’s statesmanship and “his goal for a better America,” but doesn’t include discussion of his impeachment for having “prevented, obstructed, and impeded the administration of justice” through his role in the Watergate scandal. Simon also adds that the forums won’t include discussion of Nixon’s vicious attitudes toward blacks and Jews. When 265 hours worth of Nixon tapes were released in December of 2010, Nixon’s recorded offensive statements about the Irish, Italians, blacks, and Jews were, by then, not surprising for anyone who had followed Nixon’s career and gleaned his attitudes from previous batches of tapes.

In the distant haze of history, even the image of Nixon has begun to lose its tarnish. Will those who are too young to remember President Richard Nixon learn about him from people like the list of speakers that the Nixon Foundation invited to give lectures at the Nixon Library in 2011? Is it up to the likes of Karl Rove, Ann Coulter, Dick Morris, Laura Ingraham, Newt Gingrich, Mike Huckabee, and, coming in February, Colonel Oliver North, to tell Nixon’s story? Simon isn’t going to celebrate Nixon’s 100th birthday. He concludes, “[T]here are many of us who will never forget the real Tricky Dick. And history shouldn’t either.” We can’t forget Dick Nixon either.—Rick Cohen