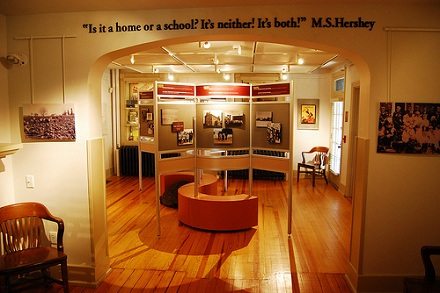 Over the past few months, AIDS activists have been protesting a decision of the Milton Hershey School to deny admission to an HIV-positive 13-year-old boy. The AIDS Law Project is challenging the school’s decision in federal court as a violation of the boy’s civil rights (Smith v. Milton Hershey School). Beyond the lawsuit, the AIDS Healthcare Foundation has been organizing protests against the Hershey School, which is legally separate from the Hershey Company, but receives its funding from the Milton Hershey School Trust, which has the controlling interest in the candy company. The Foundation is pressuring the Hershey Company nevertheless with its “No Kisses for Hershey” protests held in San Francisco, Los Angeles, New York, in the Hershey, Pa. area itself, and as far away as New Delhi and Mexico City.

According to the AIDS Healthcare Foundation, “it is ultimately the Hershey Company itself as the main funder of the school, that must answer for the decision not to admit the boy. If Hershey is truly a company that believes in its social responsibility, it will denounce this illegal and repugnant discrimination and enroll the boy at the school.”

Especially poignant was a statement released by Jeanne White Ginder, the mother of Ryan White, whose rejection from school because of his HIV-positive status lead to the landmark Ryan White CARE Act. “The news that in this day and age, the Hershey School rejected a 13-year-old boy due to his HIV positive status brings back horrible memories of what Ryan had to go through twenty-seven years ago when all he wanted to do was simply to go back to school,” White Ginder’s statement read.

As protests were being held in the week leading up to Easter, Hershey chairman James Nevels was scheduled to deliver the “CSR Keynote Address” at the International Corporate Citizenship Conference sponsored by the Boston College Center for Corporate Citizenship. The speech was titled, “Commerce & Compassion.” In the promotional CSR materials distributed by Hershey for the event, the company lauds the Milton Hershey School, noting, “Students of the Milton Hershey School are direct beneficiaries of The Hershey Company’s success.” Nevels devoted seven paragraphs of his speech to the Hershey School and also showed his audience a 60-second commercial for the school.

The school’s official position is that it rejected the boy because of his medical condition, believing it necessary to protect the health and safety of the other 1,850 pupils at the residential campus. “Unlike public schools, the Milton Hershey School is not required to accept every student,” said Connie McNamara, the school’s spokesperson. “We can lawfully exclude students who do not meet our eligibility criteria or where we cannot meet the needs of the student in our unique environment. Under the ADA [the Americans with Disabilities Act], we are not required to admit any student who would pose a direct threat to the health and safety of others. This decision was not made based on bias or ignorance. We considered a number of factors relating to the risks posed to the health and safety of others, and our ability to reduce those risks and maintain confidentiality in our unique residential environment.”

The boy, referred to in court documents by a pseudonym, had been declared qualified for admission until school administrators learned that he was HIV-positive, at which point the process apparently stopped. The school has allegedly never spoken to the boy, his parents, his current teachers, or his doctors. It appears to have assumed that, because of teenage sexuality, the boy is a threat to the health and safety of the other students.