Noam Chomsky on the Class War in America 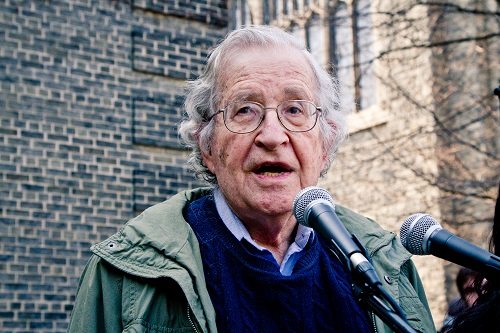 A recent interview with Noam Chomsky, the celebrated linguist and philosopher, has been published on the Reader Supported News website. In this interview, Chomsky argues that America is in the middle of a long-standing and quite brutal class war—a war many choose to ignore or completely deny. The implications of how he believes this war is being waged could have some very significant ramifications for the nonprofit sector.

When asked if he believes that America hates its poor people, Chomsky’s response boils down to a very simple, “Of course.” He argues that we do not refer to the “working class” because that suggests the class war, and instead we use a gentler term like “middle class.” The result is the same, however; there is a very class-conscious group of people who work very hard to ensure they can maintain the control they currently enjoy over wealth and power. These incredibly wealthy people are doing everything in their power to ensure that the “lower classes” do not come together in any kind of coordinated way and try to fight back. The theory is that if we ever began to think of what might be in the benefit of the common good, it is likely that we would begin to organize and fight back, with power coming in numbers.

Essentially, Chomsky’s argument is that the wealthiest of Americans are using a variety of tools to ensure that the rest of the country thinks about their own individual needs, and not those of the common good. An example of this is the kind of market-driven economy that promotes people buying cars: you can choose between buying a Toyota or a Ford, for example, but you do not have the choice to buy a commuter train. Buying a train would require people coming together and paying for something collectively that would benefit all of society. Buying a car is an individual choice.

Unions have been under attack many times throughout history, according to Chomsky. By definition, unions are an attempt to come together to work for a collective good. However, unions as they have played out in America also help promote the status quo of power. Unions, for example, argue for their members to have healthcare benefits provided by the employer. This empowers the employer to agree to something that they can easily take away later on. It also argues for the benefit of its members, not of the collective known as society. In other countries, the argument has been to have healthcare for all, while in America it has been to have healthcare for “our members.”

This push to act as an individual has led to disenfranchisement, played out in the lack of energy around voting, that basic element of democracy. Americans simply do not believe their vote will make a difference. There’s also the trend, growing among people aligning with the Tea Party, that government is bad. Government, particularly in a free democracy, is a collective process. Power can be wielded, Chomsky argues, through brute force in a violent society, or by public opinion in a free one. News channels and public relations hammering away at an idea will eventually sway people, and encourage them to make what Chomsky calls irrational choices. One poll that Chomsky cites, for example, showed that while a certain demographic said they approved of Mitt Romney’s economic plans over President Obama’s, when asked about the individual planks of Romney’s platform, the respondents were almost uniformly against them.

Chomsky’s analysis poses a challenge to nonprofits. Where will nonprofits choose to stand in the class warfare that Chomsky describes? Eventually, the nonprofit sector’s promotion of the common good will come into conflict with the interests of wealthy Americans who resist the notion of the working class seeing and organizing for its common interests. At that point, will nonprofits line up with the working class or accede to the power and funding of the nation’s top economic tiers?—Rob Meiksins