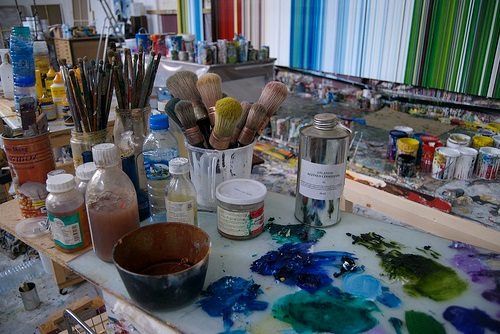 With the clock ticking toward a December 31st deadline for a down payment on six aging warehouses and the surrounding industrial space, Mayor Rick Kriseman and the City Council of St. Petersburg, Florida, have come up with $75,000 in public funds for the nonprofit Warehouse Arts District Association (WADA). Combined with $275,000 already secured in private funds, the city’s support is enough to seal the deal for the 2.7-acre property and tackle the first phase of renovations for 50,000 square feet of space that will become the Warehouse Arts District Enclave. The finished project will include affordable studio space for artists, as well as galleries, rehearsal space for performing artists, a recording studio, a foundry and a café.

As reported in the Tampa Bay Times last week, WADA board president Mark Aeling, a sculptor who already rents space on the property, believes the project is critical if St. Petersburg wants to maintain its growing reputation as an arts center, because rising rents and rapid development might otherwise force artists to move elsewhere. WADA hopes to be able to offer artists studio spaces at about half the current market rate of $12 per square foot. Aeling was “scolded” last week by City Council members for suggesting that without the city’s help to make the down payment, nearby Bradenton, Clearwater, or Dunedin could “become the next artistic spot.” Still, they approved $25,000 for the nonprofit, and the mayor added another $50,000. The Council also adopted a legal resolution that will save WADA $15,000 in property taxes in 2015 and will allow the city to audit the organization’s finances, presumably to ensure the public funds are used appropriately.

An article last month in the Tampa Bay Business Journal estimated total costs for the project at $1.1 million and noted that Peter Denne, who owns the property and used to run a recycling business in one of the warehouses, has had offers from industrial operators willing to pay more than WADA. But Denne said, “Everything isn’t just about money. I want to see the property go to the arts district.”

The first phase of renovations could be completed by mid-2015, and the plans for the Enclave could be fully realized in 2016. The warehouse district is anchored by two well-established creative institutions: Duncan McClellan Glass and St. Petersburg Clay Company, which includes the Morean Center for Clay. A number of local artists already have studios in the warehouses, and Aeling told the Tampa Bay Business Journal that 75 artists from around the country have expressed interest in WADA studio spaces.

One of the most compelling aspects of this project—aside from the fact that we like reading about the economic value of nonprofit arts projects in business publications—is that the affordable artists’ studios, under the management of a nonprofit membership organization, are intended to be resistant to the effects of gentrification that so often follow arts-led urban renewal projects, driving artists out of the neighborhoods—or even the cities—they have helped to revitalize. (See this recent newswire about the move of the Galapagos Art Space from Brooklyn to Detroit.)

The city of St. Petersburg and its residents stand to benefit at least as much as the artistic community from a modest infusion of public funds into this project. For example, the 47-mile-long, multi-use Pinellas Trail skirts the Enclave property, and according to the website for the project, “ideas are swirling around about creating an ‘Arts Gateway to St. Pete’ with colorful murals and artwork and opening up the trail access from the compound” to Duncan McClellan Glass and Morean Center for Clay. In addition to the likely economic ROI, WADA and the Enclave will almost certainly yield other types of dividends for those who live, work and play in and around St. Pete. –Eileen Cunniffe