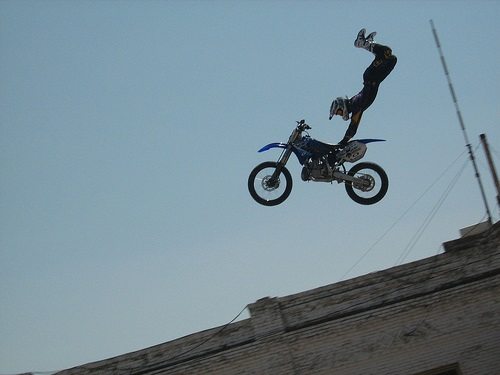 It should be no surprise that a nonprofit organizing an Evel Knievel festival in Butte, Montana would be involved in controversy. Let’s face it: the guy tried to jump over almost anything, showing no evident fear, and during his career he broke bones in his body more than 430 times, ending up in the Guinness Book of World Records for the most broken bones over a lifetime. Evel’s son Robbie has also had a stellar career as a motorcycle daredevil.

Organizing Evel Knievel Days in the family’s hometown of Butte is sort of like one of his stunts—a bit scary and controversial. It’s no small thing, having drawn thousands of visitors to Butte since the first festival in 2002 (Evel himself died in 2007). Earlier this spring, however, the City of Butte apparently leveled charges that the Evel Knievel Days Organizing Committee had been “mismanaging the event and the city was taking over.”

There are lots of confusing elements to this picture. The city and county’s top official, Matt Vincent, is married to Evel Knievel’s daughter, Alicia. Kelly Knievel, the daredevil’s eldest son, wants the event to be run by the city—that is, by the governmental entity run by his brother-in-law.

The executive director of the Organizing Committee, Chad Harrington, is a bit nonplussed. “It’s kind of a direct conflict of interest for the chief executive, who is married to a Knievel, to be directing what our private entity does,” Harrington said. “The city is not in the festival business, it’s in the festival-support business.” Vincent responded that his actions are in the interest of the city and the county and are not connected to his familial relationship to the Knievels.

Unhappy with some of the commentary, Kelly Knievel threatened to move the festival out of Butte, but later retracted that and apologized in a letter to the local press. However, his reportedly “expletive-laced” message left for Harrington, including a threat to “destroy” him, seems to have been another matter altogether.

The power was really with Kelly, who owned the rights to his father’s name and “brand.” Since it was unlikely that the Organizing Committee would be able to run the Evel Knievel Days festival without access to the Evel Knievel name, as a result, late last week the Organizing Committee withdrew from being a sponsor or operator of the festival, handing over the reins to the city.

However, since that announcement, it has been unclear exactly what the festival would look like, and, contrary to Vincent’s statement that it would definitely occur, whether there would be anything happening at all in July in Butte honoring Evel Knievel. According to the Montana Standard, county parks commissioner E. Jay Ellington has pronounced Evel Knievel Days “lost” for the moment. Kelly and his company, K and K Promotions, quickly began talking about forming a new nonprofit to operate the festival and announced the formation of Evel Knievel Days, Inc., a new nonprofit with Evel’s wife, Krystal, on the incorporating board of directors, late last week.

It is unclear whether that clarifies the situation. Presumably, the new nonprofit would have to negotiate a new agreement with the city/county in order to get the government’s approval and financial support for the festival, but one might imagine that negotiations from scratch might not necessarily be all smooth sailing or that someone might challenge the dynamic regarding Vincent’s familial connection to the Knievel family. Ellington said he is open to new ideas, up to and including holding a festival on what would have been Evel Knievel Days in place of the program tied to the motorcycle daredevil.

The late Evel Knievel tried and failed to jump the Snake River Canyon, tried but failed to jump over the fountains at Caesar’s Palace, but succeeded in jumping over plenty of trucks, buses, and cars during his career as a motorcycle daredevil. It seems like negotiating a peaceful deal among the various interests in the Butte area will end up being a bit of an stunt itself.—Rick Cohen