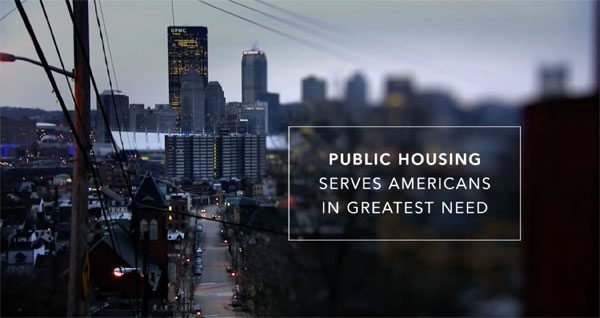 ReThink: Why Housing Matters is the name given to a public service announcement (PSA) initiative to build awareness and support for public and affordable housing. ReThink is a joint effort of three nonprofit housing groups: the Council of Large Public Housing Authorities (CLPHA), the National Association of Housing and Redevelopment Officials (NAHRO), and the Public Housing Authorities Directors Association (PHADA).

With sponsorship from the HAI Group, a company that provides the public and affordable housing community with insurance programs, ReThink recently produced this video featuring professionally and academically successful public housing residents with the objective of shattering stereotypes. Through the years, ReThink has produced a series of videos and a documentary, “Our Journey Home,” narrated by Jewel and smartly produced by the Emmy-award winning film company, Stillmotion.

With a new PSA, ReThink takes you into the homes and lives of Miles Toussaint, who worked hard to earn his full scholarship to Harvard University, Marjorie Decker, who paved her own way to become a Massachusetts state representative, Karen Forte, who overcame her circumstances to become a well-respected teacher, and Tiffany Lee, a single mom and business analyst, to dispel the misconceptions many people have about public and affordable housing and its residents.

Rice makes a powerful case for more affordable and public housing, something wholeheartedly and frequently upheld by NPQ. Perhaps the most compelling statistic Rice offers that sheds light on the number of views the ReThink PSA initiative has received is this one:

What’s even more frustrating is that Americans are aware of these issues, and even sympathize with these families and individuals—just not enough to do something about it themselves. According to the 2016 ReThink: Why Housing Matters Survey, the majority of Americans (84 percent) believe US citizens deserve a safe and decent place to live, yet most (65 percent) do not support public and affordable housing communities in their own neighborhoods.

Most of the ReThink videos on YouTube have hundreds of views. Their newest video featured in Rice’s article has 26,000 views. “Our Journey Home,” posted two years ago, has 84,000 views. Compare the results of these excellently produced ReThink videos to this recent amateur video to promote an annual event for a social service agency in Dover, New Hampshire, population 31,000, which received more than 10 million views.

What could make a ReThink advocacy video go viral? NPQ regularly examines this question. One finding is that “most viral campaigns stem from a single act outside of the organization.” So, ReThink may want to consider inspiring the production of independent videos by public housing residents.

More broadly, Dr. Sander van der Linden from the University of Cambridge has in his research outlined four key principles:

People engaged in the campaign use social media to reach out to their social networks; that’s the S of SMART. The viral campaign captures people’s attention and makes them feel good. The M represents the moral imperative to act. A successful campaign develops from a story displaying need rather than dry statistics. The person receiving this message is captured by the story or image and compelled to act and share it within their network to receive affective reactions (AR). The clearer, simpler, and more emotional the act, the more likely it will be shared. The T of successful campaigns is the final and most challenging criterion. To realize change, the social media campaign must transform the act from a quick click-and-share to a social movement.

How does this work?  Here is a video on YouTube called “Unsung Hero” that an insurance company in Thailand produced that received more than 30 million views. Its message is about the choices we make to live a better life and to improve the world around us, something everyone can agree with, even if they do not buy the company’s insurance policy. In terms of helping people see the beauty in others and in themselves, an objective of ReThink’s videos, we could also consider the success of Dove’s “Real Beauty Sketches” three-minute video that received more than 67 million views on YouTube.

ReThink’s PSA campaign is expertly produced and distributed. This is possibly the most robust and effective PSA initiative addressing housing issues. We wish them continued success with more videos that might possibly achieve viral results that move our nation to respond to the growing need for affordable and public housing.—Jim Schaffer