Nudes at the Museum…as Visitors 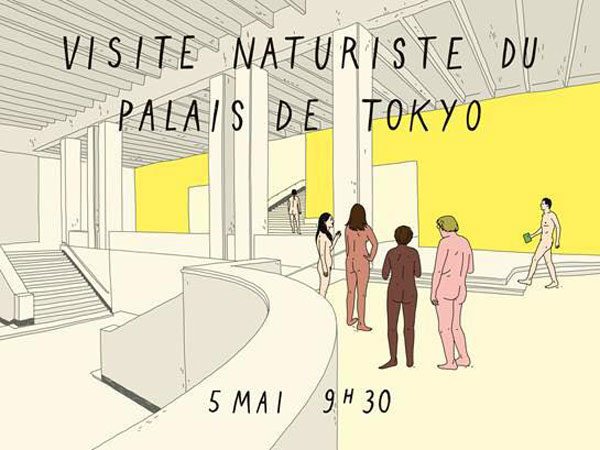 The Palais de Tokyo, a contemporary art museum in Paris, started advertising its first nudist tour of the museum, “Visite Naturiste,” in March. The announcement of the one-time event on Facebook resulted in more than 2 million visits to the page and indications of interest from 30,000 people. Only 161 tickets were distributed, though, because Laurent Luft, 48, the president of the Paris Naturist Association, said he was expecting interest from more like 100 or 200 people.

In what some might consider to be an odd but intriguing match, the exhibition, “Discord, Daughter of the Night,” addresses issues of political strife and resistance. One portion of the exhibit is described as follows:

“The Enemy of My Enemy” consisted largely of artifacts related to war and to other horrific historical events, like the My Lai massacre and the bombing of Hiroshima, arranged on platforms that were constantly moved around the space by small robots, similar to those used by Amazon in its warehouses.

Marion Buchloh-Kollerbohm, the museum’s head of education, said she understands the “potential awkwardness of combining nudism with the exhibition’s serious subject matter.” But that indeed seems to be a part of the experience, according to one of the tour guides.

“We didn’t want to make this into a conference on the post-colonial subject, because that would really kill the atmosphere,” she said. Nevertheless, she added, “I am hoping the experience of leaving their clothes at the door will help them leave some part of their identity with it, and experience it with more openness.”

Luft said that the fact that the exhibit itself had nothing to do with nudity just made the experience that much better. One visitor, Junyu Deng, said that being nude had allowed her to have a more “intimate” interaction with the art. And, in fact, on Saturday morning’s tour, there were many newcomers to public nudity, perhaps there to experience art in a different state of mind. And this may be the larger opportunity embedded in the experiment. In this moment when there are so many layers between us and the intimate experience of art, maybe being nude on site in a smaller setting makes all the sense in the world.

Still, Buchloh-Kollerbohm, who did the event as part of the museum’s social outreach program, said that the Palais de Tokyo was undecided about doing another nudist tour. Not repeating the event would be a missed opportunity. For museums, which are increasingly interested in engaging visitors in new and unique ways, this is the best idea I have heard in a long time.—Ruth McCambridge