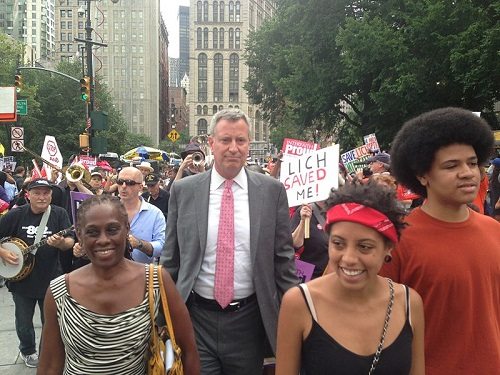 It is difficult to imagine that Mayor Bill de Blasio didn’t anticipate this kind of blowback to his progressive political agenda.

A columnist for the New York Post charges that the mayor’s social justice agenda is driving wealthy people out of New York City. He suggests that they are decamping for Florida, where there is no city or state income tax, nor an inheritance or estate tax—though, of course, those advantages for rich people in Florida predate de Blasio’s election.

The author, one Michael Goodwin, writes, “As one affluent woman, a self-described liberal, told me, ‘De Blasio hates me, so I hate him.’ She doesn’t personally know him, but draws her conclusion from his words and deeds.”

“The central problem,” Goodwin writes, “is the mayor’s childish view of wealth.”

The connection to our world is Goodwin’s link of de Blasio’s presumed dislike of rich people—and their dislike of him—to “his lack of appreciation for the impact of wealth on city revenues and the importance of philanthropy to the arts and education.”

To stoke fears of what might be lost as rich people turn into refugees from the Big Apple, Goodwin cites concerns about philanthropic support for the arts such as the $143 million budget of the Metropolitan Opera, but even moreso the “explosion of charitable dollars to help fund the charter-school movement…that seems to infuriate de Blasio.” Goodwin links de Blasio’s opposition to charter schools, with their prominent Wall Street and real estate backers, to their supposed threat to his political base (read: teachers’ unions). Goodwin even hints at a subtle reverse racism in de Blasio’s anti-charter policies, noting that “the money comes predominately from whites, many of them Jewish, and benefits predominately nonwhite children and families.”

Goodwin might want to remember that philanthropists have coexisted with the politicians who shared de Blasio’s thinking in the past and will do so in the future.  We’ll even bet that more than a few philanthropists actually like de Blasio’s point of view. During Philanthropy Week in Washington, foundation execs from the Big Apple will undoubtedly counter Goodwin’s take.—Rick Cohen