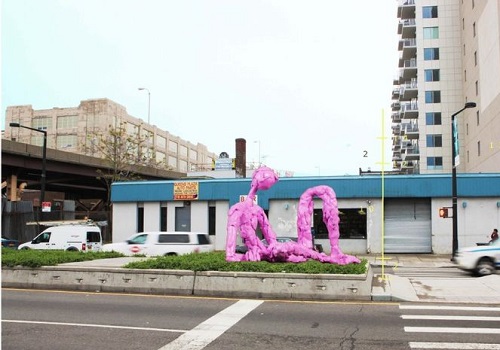 Provoked by a bright pink statue called “Sunbather” that is due to be installed on a grass median in Long Island City at Jackson Avenue and 43rd Avenue in Queens next year, the New York City Council passed a bill last week that gives a role to the public in selecting the public art paid for by the Percent for Art program.

I want to disclose right now that, though I am a big supporter of public art, the statue is not my cup of tea (understatement) and my first impulse is that I would likely walk blocks to avoid it. But it is in the nature of public art to annoy and offend sometimes, so making the public’s “OK” a necessary step a good or a bad move?

The bill is being promoted as a way to encourage diversity. Jimmy Van Bramer, the city councilman who introduced the measure, says, “My bill aims to enhance the Percent for Art program by giving New Yorkers the ability to have a greater role in selecting public art projects that truly reflect the diversity of our city.” If the bill is signed into law by Mayor Bill de Blasio, project approval will have to include a public hearing or community board meeting that allows residents the chance to provide feedback.

But it does appear that the public has already been having a go at this particular piece in public meetings. The eight-foot-tall bronze statue painted bright pink that sparked the move, which is not due to be installed until next year, has been compared to “Gumby’s grandmother” thrown on the median and “pink poop.” But Israeli artist Ohad Meromi says he respects the public’s feedback. “It’s public money, and people have opinions,” the artist said. “People have different ideas about art.”—Ruth McCambridge