NYC Mayoral Hopeful DeBlasio Not a Fan of Charter Schools 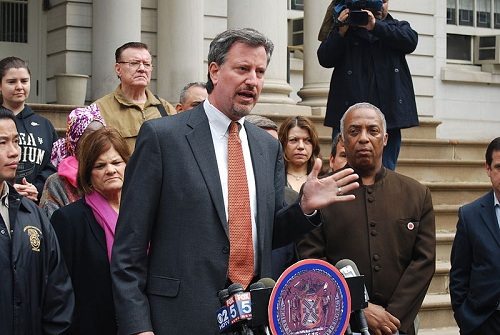 In New York City, approximately two-thirds of the city’s 183 charter schools are housed in public school buildings and they have, under three-term mayor Michael Bloomberg, enjoyed rent-free space. This is estimated to have cost the city $2,400 a student, an expense that can be added to the more than $13,000 in other public support received for each student.

Enter the more charter-critical Bill de Blasio, the Democratic candidate likely to succeed Bloomberg and a loud critic of Bloomberg’s educational agenda. De Blasio has said he would stop the free rent, arguing that Bloomberg has favored charter schools and has sapped the resources of traditional public schools. “It is insult to injury to give them free rent,” Mr. de Blasio said at an education forum this summer. “They have the money.”

Many charter school leaders have already begun seeking donations and freezing expenses in case they are forced to pay rent. They have also pushed teachers and students to speak out.

In New York, charter schools serve about 70,000 children, or about 6 percent of the student population citywide. James Merriman of the New York City Charter School Center, said of charter opponents, “They consider charters to be, simply in their own words, parasites…Those kinds of proposals would be simply disastrous.”

Republican opponent Joseph Lhota is making hay out of the melee, accusing de Blasio of attempting to “annihilate” New York City’s charter schools and he has declared that not only will he charge no rent, but commit to doubling the number of charter schools in the city. “If you oppose charter schools and other choice for minorities, inner-city kids and children of immigrants, you cannot call yourself progressive.”

Mr. de Blasio has said he would seek alternatives to closing schools as mayor and has criticized co-locating charter schools inside regular school buildings, which has caused community tensions across the city.

A study of 1,472 schools published last year by the National Alliance for Public Charter Schools reveals that most charters across the country do pay rent.

Even though it has become a high profile issue, is it affecting the way people will vote? A poll of likely voters released late last week shows that although 61 percent of black voters supported creating more charters, as compared with 50 percent of white voters, black voters still favor deBlasio by a wide margin.—Ruth McCambridge