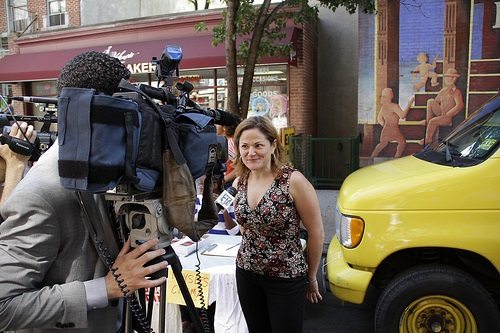 Getting discretionary grants from connected politicians might look like a neat mechanism for nonprofits to grab some extra funding, but the costs in reputation—for the nonprofits and, if they cared, the politicians—are sometimes considerable.

Take the case of the Hispanic Federation, established in 1990 with a half-dozen Latino organizational members covering New York, New Jersey, and Connecticut. The Hispanic Federation’s founder, Louis Miranda, is now a powerful New York political lobbyist. His firm, MirRam Group, gets paid well by the Federation, $680,000 for what was described as “consulting” in 2012 alone. Miranda is also the chief political consultant to New York City Council Speaker Melissa Mark-Viverito.

Is it any surprise that the Federation landed $1.3 million from the City in what Crain’s calls “pork-barrel funding,” including “more than $830,000…from a newly created program funded by monies directly under Ms. Mark-Viverito’s control.” After all of the criticism in recent years of City Council members’ grants to their favored nonprofits, outside of any avenues of open competition, Mark-Viverito seems to have reversed the process. Crain’s reports that the Council Speaker has personal control of $16.6 million of what appears to be $50 million in Council grant funds for favored nonprofits. Mark-Viverito’s spokesperson claims that there was substantial support among council members for the money for the Hispanic Federation, but the optics indicate that regardless of the support of her colleagues, the funding looks like the discretionary funding that has long been a problem and that Mayor Bill de Blasio himself has called for ending.

Will nonprofit leaders call out the Federation and Mark-Viverito? The Council Speaker has crafted an effective strategy for insulating the $833,333 from some avenues of criticism. According to Crain’s, it is from a program under the Speaker’s control called the Communities of Color Non-Profit Stabilization Fund. Also receiving grants from the Fund, each of them $833,333 apiece, are the Coalition for Asian American Children and Families and the New York Urban League.

Grants from the City totaling $1.3 million is not insignificant to the Hispanic Federation. Its total revenues in 2012 were only $4.3 million. Last year, the Federation’s entire grant support from the city was “only” $307,000, and that was above the level of earlier years when Mark-Viverito had not yet been elected council speaker.

The Crain’s article notes several of MirRam’s other priorities that intersected with the nonprofit and the council speaker, including Miranda’s recruitment of both to join him in advocating with the Federal Trade Commission against global nutrition company Herbalife, reportedly because one of his clients wanted to buy the firm. That may be odd, but more interesting is the Hispanic Federation recently making efforts to build stronger relationships with state Republicans and joining a lawsuit against former Mayor Michael Bloomberg’s “soda ban.” It is worth noting that one of Miranda’s clients was Coca-Cola, hardly a fan of the troubled policy, and the past president of the Hispanic Federation, Lillian Lopez-Rodriguez, left the job to become Coke’s Hispanic Affairs Director.

Last month, Angelo Falcón issued a scathing critique of the relationship between the Hispanic Federation and its founder-turned-lobbyist. A longtime Latino activist in New York (full disclosure: Falcon was on the board of directors of the National Committee for Responsive Philanthropy when this writer was NCRP’s executive director), Falcón writes, “José Calderon, the current President of the Hispanic Federation, was…characterized by me as a ‘witless bag man’ for MirRam. While his supporters argue that he is a good guy and honest, he has presided over what many see as a corrupt relationship between his organization and MirRam in the two years he has been the Federation’s head.”

Charging that the relationship between the Hispanic Federation and Miranda and his firm has brought unnecessarily negative publicity and criticism, Falcón says that Calderon has responded by attacking Falcón for allegedly “working against increased funding for Latino nonprofits.” Falcón further suggests that the Federation, now with 97 Latino organization members, is dominated by corporations. He reports that the board of the Federation has only one nonprofit member—from the City University of New York, surprisingly not a representative of one of the Latino service providers—with the remainder all from the corporate sector, at least two that use Miranda’s lobbying services.

Amidst the critiques of the nexus of the Hispanic Federation, Miranda/MirRam, and Speaker Mark-Viverito, there are at least three issues that all nonprofits, wherever they are, should be able to connect with:

Ultimately, the problem of the Council Speaker’s grant to the Hispanic Federation involves the intersection of politics and nonprofits, with transparency and accountability left on the sidelines as politicians give discretionary grants to favored nonprofits linked by lobbyists and campaign operatives. The Hispanic Federation may be $1.3 million richer today because of Mark-Viverito and Miranda, but nonprofit accountability and probity may be poorer.—Rick Cohen

José Calderon, President of the Hispanic Federation, sent us the following letter as a response:

I write to correct several misstatements of fact and address the tone of innuendo and rumor that characterized a recent piece written for the Nonprofit Quarterly (NPQ) by Rick Cohen entitled, “NYC Political Funding Shenanigans with Hispanic Federation and New York City Council Speaker.” While I take issue with the entirety of his work, I want to address three issues particularly:

Mr. Cohen never contacted me or anyone at the Hispanic Federation to respond to any of his allegations. If he had done so he might have avoided the glaring errors and misinterpretations that I have detailed above. It is unfortunate that the NPQ would allow itself to launch attacks against the Hispanic Federation and its partners. I expected more from the NPQ and its national correspondent.