O Brothers, Where Spend Thou? The Koch Campaign ‘12 Imprint 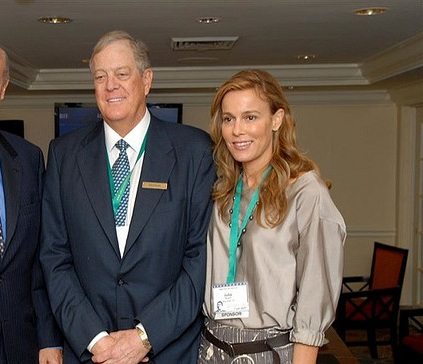 Brothers David H. Koch and Charles G. Koch are the really big money behind what is arguably the most powerful conservative political operation in America, yet few people really know who the Koch (pronounced “coke”) brothers are and what their industrial reach is. For example, do readers know that Koch Industries is the second-largest privately held company in the U.S. (behind Cargill)? That when you shop at the store, you’re buying Koch products (through its Georgia-Pacific subsidiary) such as Brawny paper towels, Sparkle paper towels, Angel Soft toilet paper, Quilted Northern toilet paper and paper towels, and Dixie paper plates and cups? That its INVISTA subsidiary makes Stainmaster carpets and Lycra fiber?

One of the Koch brothers’ primary political nonprofit operations is Americans for Prosperity (AFP), which Sara Davis of USA TODAY writes “is emerging as one of biggest outside forces of the 2012 election.” She writes that AFP has put out $25 million in attack ads against President Obama’s reelection campaign just this month. However, AFP, which is aiming to raise and spend more than $100 million on defeating President Obama this year, is not totally focused on attack ads, but increasingly on voter outreach. AFP president Tim Phillips says that it will field 2.1 million activists to reach 8.5 million voters in a dozen or so “battleground” states, such as North Carolina.

Davis writes that the Koch/AFP voter outreach effort is modeled on the successes of Democratic groups that used a voter databank for voter turnout in 2004 and 2008. Like many other organizations we have profiled in the NPQ Newswire, AFP is a 501(c)(4) social welfare organization. With David Koch as president of the organization, AFP spends lots of money for partisan political work (the notion that (c)(4)s like AFP spend at least half of their resources on social welfare functions is a fantasy) and keeps the sources of its money secret. Phillips will not identify AFP’s funders, according to Davis, because of the “chilling effect” disclosure would have on them. The Koch family is also the political influence behind a senior citizen group called the 60 Plus Association.

While they may want to be low profile, as evidenced by their keeping Koch Industries private, the Koch brothers cannot expect to be too anonymous, given that they are worth billions and spend the money for political and philanthropic causes in sums that are rarely matched by anyone else. In philanthropy, for example, David Koch gave $100 million to New York City’s Lincoln Center for the renovation of the State Theater, which is now named after him, and $35 million to fund a new dinosaur hall at the Smithsonian Museum of Natural History. In addition to their campaign apparatus, the Koch brothers also maintain a lobbying powerhouse. In 2008, Koch Industries spent more than a whopping $20 million on lobbying, according to the Center for Responsive Politics. The company has already spent $5.37 million on lobbying in the first half of 2012. Regular readers of the NPQ Newswire will also remember the Koch brothers for their tug-of-war with non-Kochs for control of the libertarian Cato Institute due to the brothers’ belief that Cato hasn’t been as effective as the others think.

To tell the public who the Koch brothers are, a liberal 501(c)(4) called Patriot Majority is running 30-second TV ads on CNN and MSNBC under the theme “Stop the Greed Agenda.” Like AFP’s Phillips, Patriot Majority president Craig Varoga won’t release the names of his organization’s donors, saying, “We didn’t make the rules, we just play by them.” Of course, Patriot Majority’s $500,000 ad buy doesn’t quite match the expenditures of the Koch family’s political apparatus of “independent” social welfare organizations.

Between throwing big bucks at political operations like AFP, conservative and libertarian think tanks such as Cato, and Beltway lobbying, the Koch brothers have a network of operations, some of them tax-exempt, supporting an unparalleled political machine. Will it be effective in achieving the Koch brothers’ aims in the November elections? We don’t know. Is this much money going into buying political influence a good thing for American democracy? We don’t believe so. Do you?—Rick Cohen